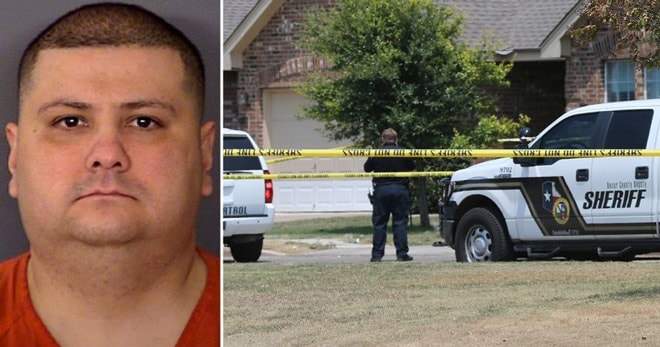 Video captured by a witness showed Gilbert Flores – armed or not – with his hands clearly raised when he was fatally shot. (Photo: San Antonio Express-News)

The family of Gilbert Flores has filed a lawsuit against the Bexar County Sheriff’s Office and the two deputies who shot Flores last month while his hands were raised in the air.

The deadly confrontation was captured on cell phone video by a witness and clearly shows Flores with his hands up as he was shot Aug. 28 while deputies responded to a call about a domestic dispute. Flores allegedly attacked his wife and infant child, hitting and cutting his wife and punching the baby before responding officers arrived on the scene.

As deputies confronted Flores outside of the home, he was still armed with a knife and had been threatening suicide by cop. Flores remained combative, even attempting to stab one of the deputies before finally raising his hands in what appeared to be a surrender.

According to the suit, “Mr. (Gilbert) Flores … stopped all resistance and proceeded to place both of his hands above his head, surrendering to the will of the deputies. Mr. Flores’ actions in surrendering with his hands raised, with or without a knife, reflected that there was no immediate danger of bodily injury to the officers or others. This act of surrender and contrition showed that any such threat had passed.”

Authorities claim a second video – taken closer to the incident – was captured by a neighbor and shows more clearly the knife in Flores’ hand, as well as his combative nature toward the officers, although that video has yet to be released. Flores’ family is asking that a judge order the video to remain in its original, unaltered state, according to reports from the San Antonio Express-News.

Nonetheless, the suit names deputies Greg Vasquez and Robert Sanchez as defendants, and accuses them of “executing” Flores on the front lawn of his parents’ home.

Philip Hayden, a retired FBI agent who previously wrote training manuals on the use of deadly force, called the deputies’ actions “unnecessary and unreasonable.”

Terri Burke, executive director of the American Civil Liberties Union of Texas, admitted that while the video “doesn’t show every aspect” of the confrontation, it still raises “serious questions.”

“Like other events that that we’ve seen across the country involving interactions with law enforcement, this one points to a troubling trend of overzealous and abusive policing,” Burke said.