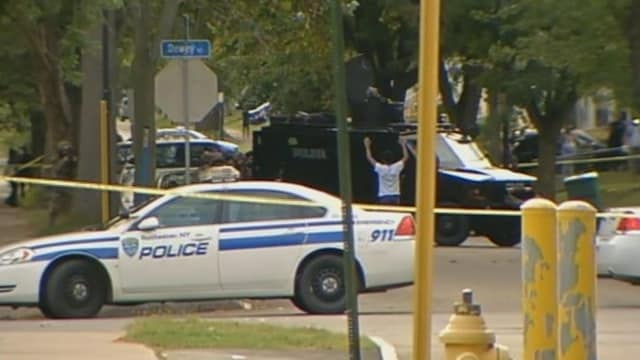 Two blocks of the Rochester area where the burglary took place was shut down for five hours as police searched. (Photo: TWC News)

A 21-year-old man appeared in a New York federal court Friday on charges of unlawful possession of stolen guns, the Justice Department said in a Sept. 15 announcement.

Ramel Robinson obtained the firearms after stealing a gun safe, which contained a Saiga AK-47, Stag Arms AR-15, a Maverick shotgun, a Ruger KMin-30P, a nondescript AR-15 and numerous rounds of ammo, from a Rochester home on Sept. 9. If convicted, he faces up to 10 years in prison and a $250,000 fine.

According to the criminal complaint, officers with the Rochester Police Department responded to a report of a burglary around 1:30 p.m. The victims told officers that an intruder stole their gun safe between 5:30 a.m. and 1:30 p.m. They also gave police video of the suspects in action, which was captured by a surveillance camera set up outside their house.

The video spans about 30 minutes and shows a black man riding a bicycle outside the house at about 5:30 in the morning, one of the victims leave (as the other slept inside the house), and a short time later, the same man on the bicycle walking up the driveway and put his hood up over his head before stepping off.

About a half hour later, the man returns with another person, described as a black male, and they approach the house. A few minutes later, the same men are seen leaving the property pushing the safe, which was inside a green garbage tote.

Investigators determined that the two men entered the house through an unlocked window. After shutting down and searching the area for five hours, police located a house in the neighborhood where residents had smaller items, like a rifle sling and ammunition, that the victims’ identified as inside the safe.

Police, along with federal agents, searched the house and an abandoned house next door, where they recovered two of the stolen guns.

They interviewed two brothers who lived at the occupied house, Raekwan Blandino, 20, and Draevon Blandino, 18,who explained that around 6 a.m. two men — Robinson and Joseph Barthel — showed up and admitted to committing a “stain” or a “jug,” which is slang for the burglary of a home.

The Blandinos said Robninson had an AK-47 rifle and two AR-15s with him and told them two other guns were stashed close by. Raekwan Blandino said he did not accept any firearms when they were offered to him.

The brothers were charged with fifth-degree criminal possession of stolen property, a misdemeanor.

Police arrested Robinson a few days later, on Sept. 14, for driving a stolen truck. During an interview, he admitted that he, along with Barthel and Draevon Blandino, stole the safe. He also told investigators the location of the other two guns, which were hidden in the basement next door to the Blandino house.

It’s unclear what happened to the safe and if Barthel has been arrested or will face any charges.