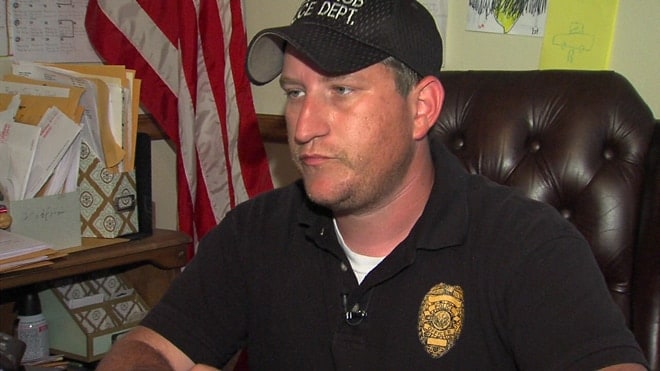 Erek Balentine was recently caught on camera losing his temper while dealing with an open carry advocate. (Photo: KATV)

Erek Balentine announced Sunday he would be stepping down as police chief for the Bald Knob Police Department, citing safety concerns for his family.

Balentine’s time as police chief will conclude on Oct. 5, two weeks after his letter of resignation was handed over to Bald Knob Mayor Beth Calhoun. In the letter, Balentine stated that it had been a pleasure to work within the department, but that it is “time to move on from this City and Police Department.”

Additionally, Balentine told local media, “If someone could stoop as low enough to burn my truck, then I don’t want to take that chance to endanger my family,” but also said he would continue to pursue all of his current cases and offered continued support for the department and city, if needed.

The announcement came just days after Balentine’s truck was set on fire outside of his Arkansas home and spray painted with the words “2 Amendment” across both sides of the vehicle. The act, although still under investigation, was presumably one of retaliation following the arrest and subsequent conviction of Richard Chambless for disorderly conduct and illegally carrying a firearm.

Chambless was arrested in May for openly carrying a holstered handgun on his hip at a local McDonald’s. Concerned citizens – who were unaware of Chambless’ intentions – called the police after he repeatedly entered and exited the fast food restaurant and ordered a cup of water. And while many gun rights advocates in the state believe Chambless’ actions were perfectly legal, others are not so convinced.

The confusion over Chambless’ case comes after years of controversy surrounding Act 746, which further defined an offense to be if a weapon was carried “with the purpose to attempt to unlawfully employ the weapon against another person.” Many gun rights advocates argue that since there is no statue specifically banning open carry in the state and the act does not stipulate a handgun that is carried either openly or concealed, then Arkansas is recognized as a constitutional carry state.

However, Arkansas’ former Attorney General did not agree with the stance and Second Amendment advocates have anxiously awaited the new Attorney General, Leslie Rutledge, to issue an official opinion agreeing with their interpretation of the law. After repeated pushes from the gun rights community – and following Chambless’ conviction – Rutledge finally released an opinion, which appeared to attempt to partially appease those on both sides of the argument.

“While I do not encourage ‘open carry,’” Rutledge said in the opinion, “in general merely possessing a handgun on your person or in your vehicle does not violate [the law] and may be done if it does not violate other laws or regulations.”

However, Rutledge also stated that those who choose to open carry should be aware that they may be stopped by law enforcement to determine their intentions or “lawfulness” of their conduct. And lastly, to the dismay of many of the state’s gun rights advocates, Rutledge pointed out that “the laws requiring a license to carry a concealed handgun still have full force and effect,” and that essentially concealed carry licensing and laws are “unaffected by Act 746.”

So far, while several others have been issued citations and even arrested for open carry, Chambless has been the only individual in the state to face an actual conviction since the enactment of Act 746.