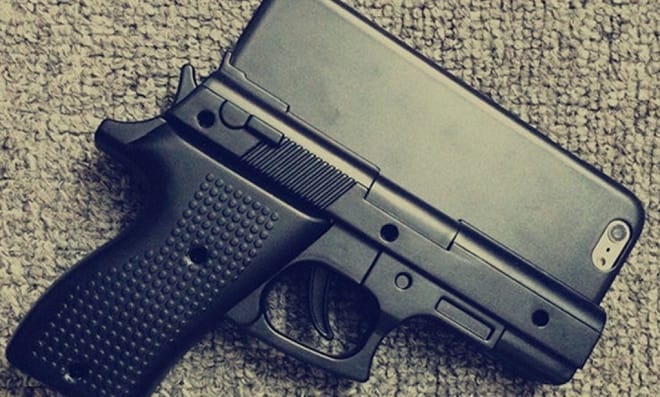 Use a gun (cell phone case) in Planfield, Illinois– get fined. (Photo: Twitter)

Citing life-or-death dangers, the city of Plainfield on Monday night approved an ordinance to prohibit the possession, sale or transfer of cell phone cases shaped like guns.

The Village Board of Plainfield, a city of 40,000 in Will County, unanimously approved the measure to restrict the faux firearms after Police Chief John Konopek warned trustees of the danger of the cases, as reported by the Herald-News .

While authorities have not had a problem with the cases, they see the ban as preemptive. “This is really a proactive ordinance,” Konopek said.

The cases, designed to look like a gun, have prompted officials this summer in New Jersey and New York to issue public warnings against carrying them while Chicago went a step further and banned the cases in July under threat of a $750 fine. Indianapolis followed up with their own ordinance earlier this month citing the cases were, “indistinguishable from a working handgun and could inadvertently result in the use of force by police.”

Formerly sold online through Amazon, the digital retailer pulled the cases after backlash from police lobby organizations and gun control groups. They are nevertheless still sold through other outlets.

The drive to prohibit the cases coincides with efforts by anti-gun groups through a social media campaign to convince smart phone maker Apple to remove the digital ideogram depicting a gun from their iPhones.

New Yorkers Against Gun Violence kicked off their “Disarm the iPhone” drive in July with a website, video and press release targeting the popular mobile devices. The group cautions that the emoji, one of hundreds on the product that come preloaded from the factory, reflects the ready access to guns in the country.

While the Plainfield ordinance on fake phone ordnance authorizes a $250 fine plus court costs for initial offenses and $500 for subsequent ones, Konopek says there may be some leeway on youthful offenders.

“But if a 10-year-old is walking around with something like this, we’re going to take a visit to the parents,” Konopek said.