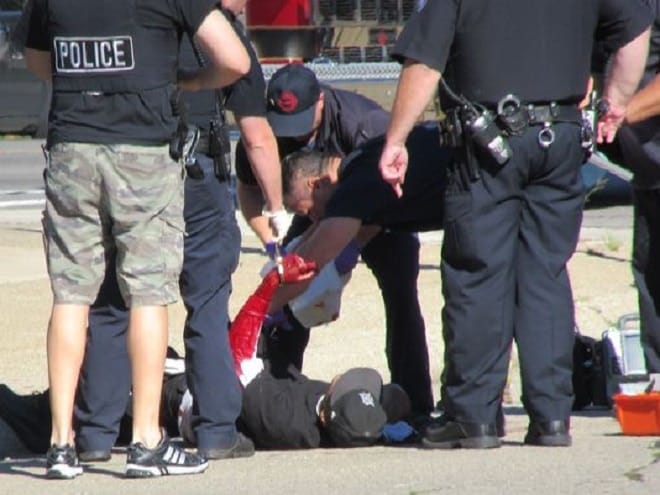 Alleged bank robber Henry Mann, 43, came out on the bad end of a one-sided gunfight with a lawful gun owner this week. (Photo: Gary Guyette via The Detroit Free Press)

A concealed carry permit holder in Warren, Michigan, found himself face to face with a bank robber and shot the man three times.

The permit holder, Ruben Kendrick, encountered the alleged armed robber Monday afternoon as the gunman was leaving the Citizens Bank near 9 Mile with $11,000 in cash garnered from the tellers.

Upon threatening the permit holder, the robber, Henry Mann, 43, picked up three gunshots from the citizen, as reported by the Detroit Free Press.

Mann was subsequently handcuffed by responding officers and taken into custody with non-life threatening injuries. Recovered at the scene were the robber’s loaded but unfired Colt Mark IV and the majority of the cash.

Addressing reports that the permit holder shot the robber once in each arm and one time in the legs with his Smith and Wesson Shield, Fouts commended the apparent marksmanship of the citizen.

“I’m happy that no one was seriously injured,” Mayor Jim Fouts said. “He apparently exercised some caution by not shooting the robber in a vital area.”

Fouts, who made headlines last month for his move to ban flamethrowers for all but law enforcement and other official users, urged restraint in defensive gun uses.

“I would caution people against using firearms unless absolutely necessary,” he said.

Mann reportedly had an extensive criminal history including a conviction on second-degree murder and assault/bodily harm less than murder in 1989. It is unclear how he obtained the handgun used in this week’s robbery.