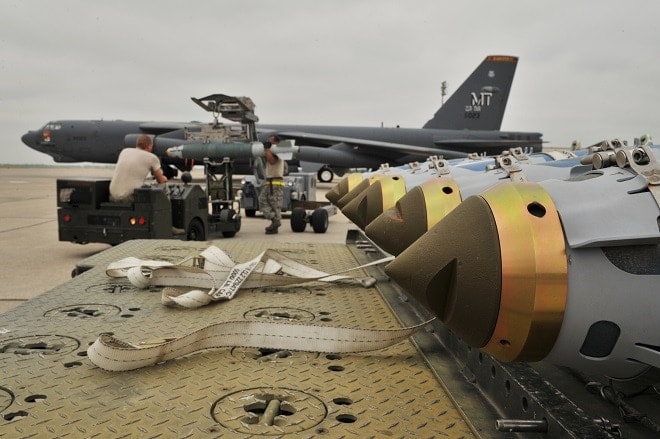 Hey you remember when we had 70 nuclear-capable B-52 bombers? Well about that…(Photo: U.S. Air Force)

As part of a 2010 agreement with Russia, the U.S. Air Force announced this week they have neutered the ability to carry nuclear ordnance from about half of their B-52 fleet.

Of the 70 B-52s remaining on active duty, the Air Force has converted 30 to conventional-weapons only, meaning they can no longer carry nuclear bombs and cruise missiles on strategic deterrence missions. A further 12 B-52s in long term storage in the Arizona desert have also been converted.

The conversion, conducted this summer, comes in obligation with the terms of the New Strategic Arms Reduction Treaty (New START) agreement, signed in 2010 by Presidents Obama of the U.S. and Medvedev of Russia.

Under the treaty, each heavy bomber is counted as one warhead, meaning each B-52 converted allowed a single-warhead equipped Minuteman ICBM silo or Trident submarine launched ballistic missile tube to remain in service.

Both the nuclear equipped and conventional B-52s will remain in service until at least 2030 when they are expected to be replaced by a new strategic bomber.