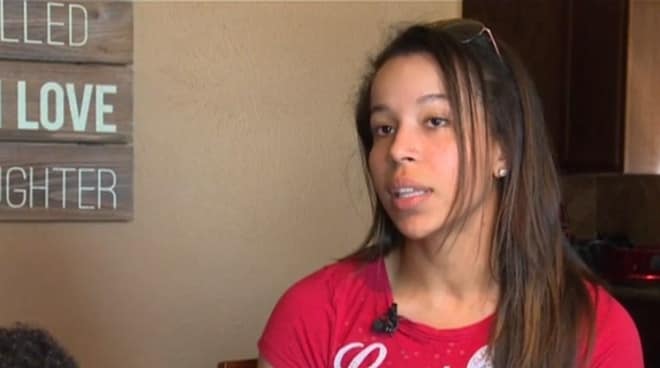 Lashae Young said although the suspects were only in her home for about 30 minutes, they left a terrifying feeling that will always be with her. (Photo: KHOU)

It was the scariest night of her life. Lashae Young didn’t know what to expect as the robber held a gun to her head, whispering “just relax.”

Young and her family were held hostage at gunpoint inside their Katy, Texas, home during an early morning armed robbery last week. For her, the incident began when she woke up in the middle of the night to strange voices in her house, Young told reporters with KHOU. She had fallen asleep on the couch with her 2-year-old child, King, but around 2 a.m. Sunday, Young saw her husband coming out of the laundry room, only four men were with him, one of whom had a gun pointed at his head.

The suspects apparently waited for Young’s husband outside of their house and when he arrived and opened the garage door, they made their move, forcing their way into the home. Young recalled the gut-wrenching moment they forced her and her husband to the ground, face down with their ankles crossed. Young said she knew she was going to be shot dead while lying on the floor of her own home.

While one of the suspects held Young and her husband at gunpoint, the other suspects ransacked the house, taking whatever they could find of value. Thankfully the couple’s toddler stayed sleeping on the couch and did not witness any of the incident.

Still, Young said she has never in her life felt as much fear as she did during the half hour the intruders were in her home.

“I was begging, pleading, crying.” she recalled. “I was doing everything possible.”

Young said at one point the man holding a gun to her head made an attempt to console her.

“His exact words were, ‘Baby girl, just relax. We are not here to hurt you. Just want to take what you have and we’ll be out of your hair,’” Young recalled, but she was far from being comforted. 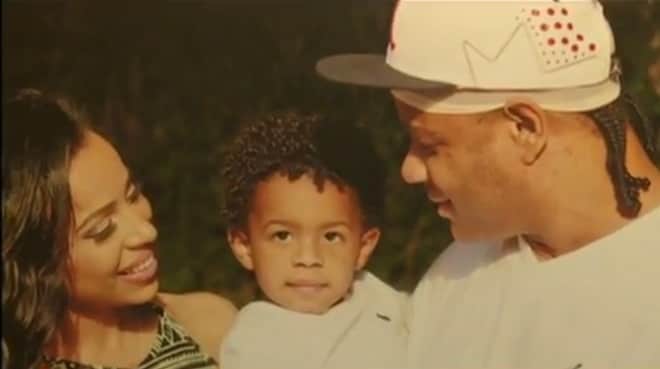 Lashae Young said one of the most terrifying things was knowing her child was in danger. (Photo: KHOU)

The suspects, who were described as four black males approximately 25 to 35-years-old, eventually made off in a dark-colored Toyota Camry with the couple’s wedding rings and other jewelry, pricey purses, iPhones and computers, as well as cash and other valuables. And while all of those items can be replaced, Young said there’s one thing the suspects took that morning which she can never get back.

“That’s the place you’re supposed to feel the most secure, in your house, and they stripped that from me. I will never get that back,” said Young, who added she does not believe that was the suspects’ first robbery and she does not want anyone else to ever have to experience what she went through.

The couple spent most of the day Wednesday increasing security around their home with indoor and outdoor surveillance cameras and alarms. Meanwhile, the Harris County Sheriff’s Office is investigating the robbery and asks anyone with information to contact authorities.