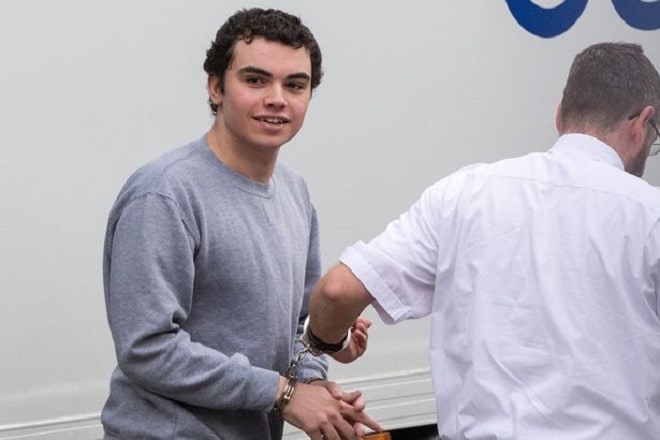 Disgruntled former college student Liam Lyburd could be in one of Her Majesty’s prisons for the rest of his life. (Photo: Andy Commins/Daily Mirror)

Despite some of the tightest gun control on the planet, a British man was able to acquire a handgun, extended mags and explosives as part of a plot to attack his former school.

Liam Lyburd, 19, of Newcastle upon Tyne, was sentenced to life imprisonment this week on eight charges of possessing weapons with intent to endanger life.

As noted by the BBC, Lyburd gathered a cache that included a Glock 19, three 33-round magazines, 94 hollow-point bullets, CS gas, five pipe bombs and two other improvised explosive devices despite the country’s long history of civilian arms control.

According to court documents, Lyburd planned to use the weapons in an attack on Newcastle College, from which he had been expelled two years prior for poor attendance. He was arrested last November after two Northumbria Police constables visited him at his home on a tip from an individual who encountered threats and disturbing pictures posted by Lyburd online.

Despite a defense that portrayed the reclusive man as living in a fantasy world, Lyburd was found guilty in July.

The internet-savvy teen obtained the Glock and other items through Evolution Marketplace, a successor to the Silk Road, a long-time “dark web” site in which users could buy and sell everything from illegal narcotics to munitions using Bitcoin cryptocurrency.

In court, Lyburd testified that buying the Glock was so easy it was “like buying a bar of chocolate.”

He obtained funds for his purchases through a complex extortion scheme in which he used online malware to infect computers, which he in turn held for ransom from their owners.

However, despite heavy regulation on legal gun ownership in the country, criminals continue to obtain illegal guns by any means to include reactivating antique guns, converted blank-firing pistols, crafting homemade weapons and smuggling modern weapons into the country. In 2013, British police noted over 9,000 firearms used in crime in a country where police rarely carry guns themselves.

Although sentenced by the Newcastle Crown Court to life, under the UK’s corrections guidelines, Lyburd could be released in as few as eight years.

As for Evolution Marketplace, the online black market vanished in March when its administrators allegedly disappeared with an estimated $12 million in Bitcoin held in escrow with the site by its users.