40 injured, 3 fatally shot in Chicago over the weekend 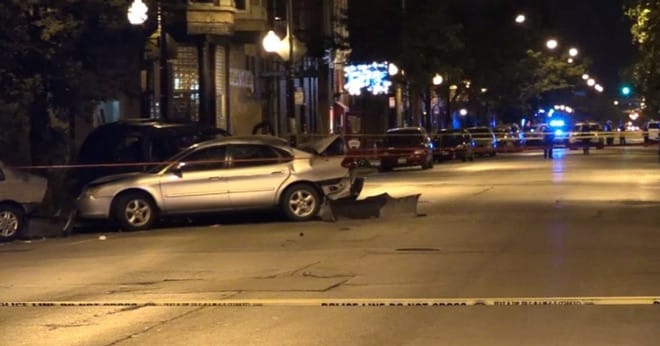 The fatal shootings included one incident believed to be gang-related, another stemming from an argument between two men and a third officer-involved shooting. (Photo: Fox 32)

It was another violent weekend in Chicago, ending with three fatalities and 40 individuals wounded during numerous shootings across the city.

A 10-year-old girl was wounded and three people killed during an incident Sunday afternoon, but neither the young girl nor an 18-year-old woman who was also shot during the same incident were the intended targets, according to reports from a local Fox affiliate. However, police did not elaborate on a third victim or his possible involvement in the shooting.

The girl and the woman were standing outside in the Woodlawn neighborhood near a 19-year-old man just before 1 p.m. when a suspect emerged from a vacant lot close by and opened fire, striking all three.

The young girl, who suffered a graze wound to her neck, was transported to a local children’s hospital and was last reported to be in good condition. The 18-year-old woman was grazed in the calf with a bullet as well. She was taken to the hospital where she is said to be in stable condition. The 19-year-old man was shot in the back and remains in critical condition.

Related: 6 people shot to death in Chicago; 5 in less than 10 hours

In another shooting in the early morning hours Sunday, two men – 23 and 24 years old – were both shot in the head in what police believe to be a gang-related incident. The 23-year-old was transported to the hospital where he later died, while the 24-year-old man remains in critical condition.

A 25-year-old man died at 12:43 p.m. Saturday after he was shot during an argument with Marvin Lee, 34, who initially told police the shooting occurred when the man broke into Lee’s home. However, investigators determined the men were previously acquainted and that the shooting was not in self-defense or during the commission of a home invasion. Lee was subsequently arrested and charged with murder.

The third fatally occurred during an officer-involved shooting around 9 p.m. Friday after the man, who was armed with a sharp object, came at the officer in a threatening manner.

While holiday weekends have typically seen more shootings in the Windy City – and other cities across the country – this past weekend’s count fell not too far behind Labor Day weekend, which saw a total of 46 injured and eight killed.