Cuomo calls for government shut down over gun control 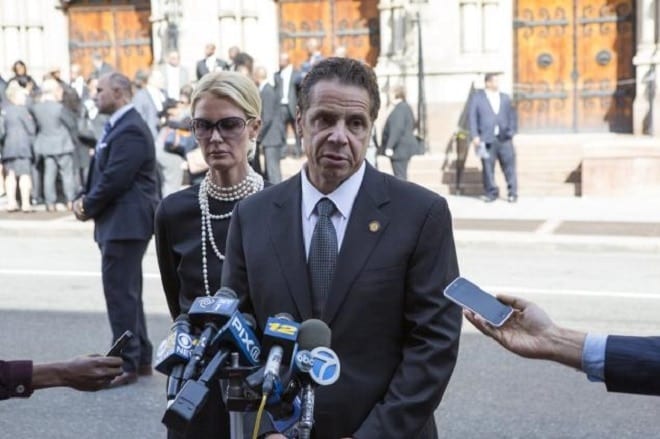 In delivering the eulogy Saturday for an aide killed by a stray bullet on a New York City street, Gov. Andrew Cuomo stepped up his calls for national gun control.

The remarks came Sept. 26 at Emmanuel Baptist Church in Brooklyn during the funeral for Carey Gabay, 43. The Harvard-educated Gabay was the first deputy general counsel at Empire State Development, the state’s chief economic-development agency, and had been shot in the top of the head earlier this month at 3:41 a.m. while taking cover from gunfire before the annual West Indian Day parade. Taken off life support on Sept. 16, he died, leaving behind his wife and Jamaican immigrant parents.

While neither the shooters nor any of the seven weapons used in the gunplay that ultimately killed Gabay has been found, Cuomo railed against arms coming up from the South along the so-called “Iron Pipeline” into New York City, which has some of the strictest gun control laws in the country.

“It’s not enough for New York State to pass a gun law and close the front door when the guns are coming in the back door, when the guns can come up from Virginia or South Carolina for anyone willing to take a car ride,” said Cuomo.

The remarks echoed statements made repeatedly by Cuomo during Gabay’s hospitalization.

The solution pitched by the governor in his eulogy delivery? A government shutdown.

Gun rights advocates in the state were not impressed.

“Aren’t you supposed to memorialize the person who is dead in a eulogy rather than use it as a cheap chance to score political points?” reads a statement from the NY2A Grassroots Coalition. “Besides, Cuomo must have missed all those news stories that indicate support for more gun control on a federal level is it historic lows.It seems the only people who want more gun control live in cities that already have strict gun control, but are seeing outrageous acts of gang violence.”

Meanwhile, the New York Police Department has been pursuing illegal gun dealers in the city including bringing in a 500-pound gang leader nicknamed “Wobbles” and his associates for illegally selling no less than 93 guns to undercover agents in the last year. However, rather than being tied to thefts in Georgia, authorities noted that these weapons came in large part from Maine and Connecticut – the latter of which passed a 2013 mandate for gun laws even more draconian than in New York state.

Last month the leader of a “gun family” who brought 151 guns up from the Georgia, some stolen, was sentenced to 18 years in prison. The ringleader sold the guns to undercover officers on a residential street corner in the Canarsie section of Brooklyn.

This morning I delivered the eulogy at the funeral and celebration of the life of Carey Gabay. Audio: https://t.co/gf0LyqKnbg