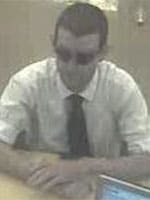 Authorities think he bought that shirt from Express. (Photo: FBI)

Federal authorities are looking for information on a suspect they’re calling the Hipster Bandit who is responsible for two bank robberies in the San Diego area.

Named after his sense of fashion and sunglasses, the Hipster Bandit is a white male with short dark hair and a thin build. He’s roughly 5-foot-4 and weighs around 110 pounds and looks to be in his early 30s. Other identifying marks include protruding ears and freckles.

The Hipster Bandit is accused of robbing a U.S. Bank in Fallbrook, California, at around 10 a.m. on Sept. 25. Authorities say he approached the teller like you would when conducting a normal transaction, but handed the teller a note stating he was there to rob the place and demanded cash, which the teller complied. 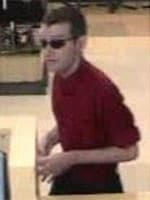 The Hipster Bandit is also believed to be responsible for robbing the U.S. Bank inside of a grocery store in La Mesa, California, on the morning of July 2.

During this robbery, he sat down at desk in front of the teller’s desk and asked if the teller could help him. He then slid a white envelope with writing on it demanding cash. The note also provided instructions on how to package the money. The teller complied with the robber’s demand and provided him with a sum of money.

No injuries have been reported in any of the robberies at this time. And police are diligently searching all thrift stores, coffee shops, and independently owned grocery stores for the suspect.