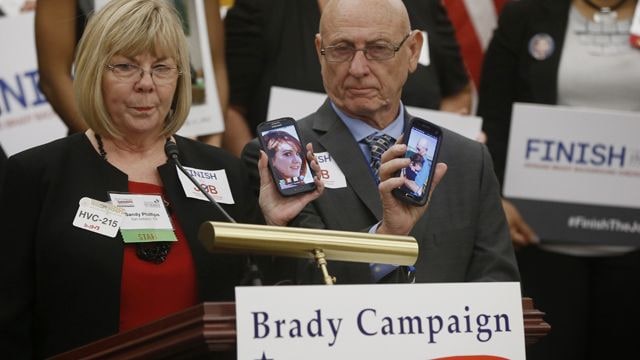 Lonnie and Sandy Phillips, who lost their daughter, Jessica Ghawi, in the Aurora theater shooting in 2012, said they have no qualms with the Brady Campaign. (Photo: Charles Dharapak/Associated Press)

The parents of an Aurora theater victim who lost a civil suit against Lucky Gunner said they plan to take on the laws used to dismiss the case and make them pay $203,000 in defendants’ attorney fees.

“We knew the risks of bringing the case. We knew that Colorado and Congress have given special protection of the gun industry, and we knew that under Colorado law we could even be ordered to pay attorneys’ fees because of those special protections,” wrote Lonnie and Sandy Phillips in a opinion piece published Friday by HuffPost. Their daughter, Jessica Ghawi, was one of a dozen killed inside a Colorado movie theater in July 2012.

“But we thought it was important to take a stand, to fight to prevent other families from suffering as we have. We did not seek any money in our case,” they continued. “We just wanted injunctive relief — to have these companies act reasonably when they sold dangerous materiel, like 100-round ammunition magazines, ammunition, body armor, and tear gas.”

The lawsuit argued Lucky Gunner and two other online retailers failed to thoroughly screen the buyer, who would later use the items to kill 12 people and injure 70. An investigation of the shooter’s background revealed a documented history of mental illness, but no criminal record.

A federal judge dismissed the case in June on grounds that the plaintiffs were protected under the Protection of Lawful Commerce in Arms Act, which shields gun makers and retailers from lawsuits if their products are used with malice. Along with explaining legal reasoning, the judge berated the Brady Campaign for the suit and using the courts to affect public policy. Yet, the Phillips were ordered to pay the fees, not Brady.

Also, following the judge’s order, Lucky Gunner announced that it would donate the winnings to a gun lobby, a sort of homage to the PLCAA.

“We believe that the judge’s decision was wrong, and that it is unconstitutional to financially punish people for bringing a lawsuit, especially a public interest case that did not seek a dime,” the Phillips wrote. “But rather than risk possibly being ordered to pay even more fees, we are changing our focus from going after these laws in the judicial branch (we have dropped our appeal) to getting them overturned on the legislative level.”

They added that they’re still working with Brady, who has been working pro-bono, and have brought on more attorneys for the legislative fight.