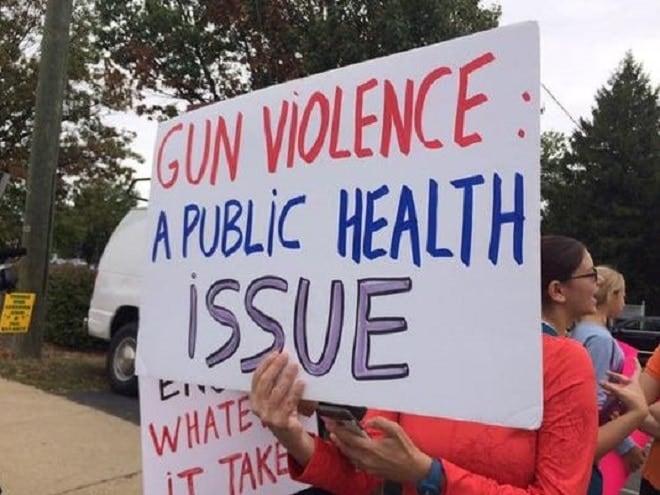 Protesters were on hand last weekend at the reopening of Nova Firearms at their new location to check their iPhones and hold up signs. (Photo: Surae Chinn/WUSA 9)

A crowd of protesters picketed Nova Firearms in McLean, Virginia, on Saturday, after the recently relocated store  reopened about 100 feet from an area elementary school.

Advertising themselves as, “The original gun shop inside the Washington, DC Beltway,” on their website, veteran-owned Nova relocated from Elm Street to their new location on Chain Bridge Road earlier this month.

While the move was less than a half-mile down the road, the fact that it is now across from the back of Franklin Sherman Elementary School brought out protesters for the store’s reopening on Sept. 26.

“We are hoping that we can encourage this store owner to go back to the store that he already has about three blocks away,” said Janie Strauss, an area school board representative. “Locating a gun store right next to a school that holds 400 children is ridiculous. Our children deserve better than this.”

Shop owner JB Gates, who earlier this summer met with resistance when he tried to open a location in nearby Arlington, argues that, while he understands certain misgivings, the store is compliant with all laws.

Competing Change.org petitions, started on the same day, are vying for signatures, with one opposing the store garnering 1,300 supporters and another supporting the firearms retailer with 400.

While not directly involved in the protest, national gun control groups such as the Coalition to Stop Gun Violence, pointed to the McLean event as an example of grass roots activism.

For Gates, he is open to establishing a dialog with area parents and points out that gun education is a big priority for him as he intends to hold many gun safety and self-defense classes at their new location.

“We appreciate concerned parents willing to hear us out and be made aware we are here to help. We encourage you to come in to our store and get to know us,” said Gates.