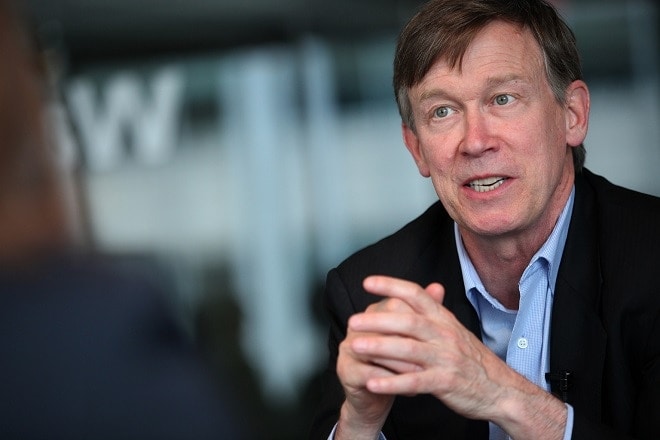 Some of the polarizing gun control laws signed by Gov. John Hickenlooper two years ago are once again in court this week. (Photo: Julia Schmaltz/Bloomberg)

The appeal is the next progression of a case launched by 54 sheriffs who joined gun rights activists to challenge adoption of HB 1224 banning magazines with greater than 15-round capacities and HB 1229 requiring background checks for all firearm transfers.

Last June, U.S. District Judge Marcia Krieger ruled the laws were constitutional saying, “No evidence presented here suggests that the general ability of a person to defend him or herself is seriously diminished if magazines are limited to 15 rounds.”

Now the case, Colorado Outfitters v. Hickenlooper, is under review by a three-judge panel of the Tenth U.S. Circuit Court of Appeals consisting of Judges Jerome A. Holmes, Carolyn B. McHugh and Nancy Moritz. Holmes is an appointment by President G.W. Bush while McHugh and Moritz are more recent appointments by President Obama.

Arguing the case this week for the plaintiffs were noted Denver trial attorney Richard Westfall, who formerly served as Solicitor General of the State of Colorado and Second Amendment luminary Prof. Dave Kopel.

“The Court seemed to have understood and accepted the key facts for our side, such as the difficulty Coloradoans actually have in finding gun stores that will process private sales, loans, and returns,” Kopel told Guns.com Tuesday.

“The Judges were very interested in standing,” he explained. “Although we argued that the plaintiffs easily pass the relevant tests for standing, if the Court disagrees, that could lead to long-term progress for the Colorado litigation. Since the district court ruled against us on the merits, not on standing, a Tenth Circuit decision on standing would erase that loss, and reset the score to zero. We would be able to bring a new case, following whatever roadmap on standing the Court would provide.”

The Sheriffs’ case is joined by briefs from a plethora of gun rights groups to include the National Rifle Association, National Shooting Sports Foundation; a number of law enforcement groups, and the Attorneys General from several pro-gun states to include South Carolina, Utah and Montana.

Garfield County Sheriff Lou Vallario told local media the coalition of lawmen backing the case are committed to protect Second Amendment rights and have decided to push through with the appeal all the way to Washington if needed.

“If we stop there then look at all the decisions that were ultimately decided in the Supreme Court that would’ve never been decided and what’s in the best interests of this country, so we want to make sure that we have the opportunity for the full process — the full justice system — to hear out our claims and our opinion and our side of this,” Vallario said.

Deputy State Attorney General Matthew Grove, who defended the state in District Court last year, reprised his role in front of the panel this week. Colorado’s case is joined by briefs from gun control organizations including the Brady Center to Prevent Gun Violence and Everytown for Gun Safety as well as the Attorneys General of nine states with strict gun laws including New York, Massachusetts, Connecticut and Hawaii.

A decision in the case is expected this winter.