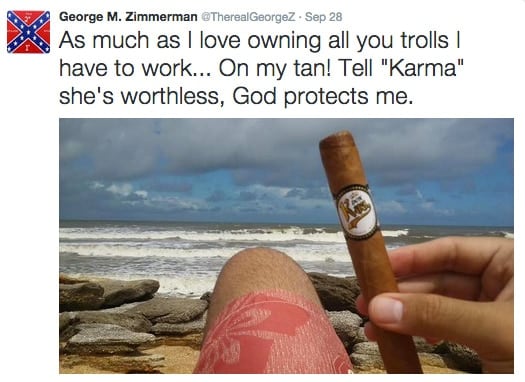 His attitude seems to have changed from attempting to mold public perception about himself to just goading the public into outrage.

“As much as I love owning all you trolls I have to work… On my tan! Tell “Karma” she’s worthless, God protects me,” he wrote on Twitter.

And, “My life changed for the better, when I replaced worrying “what if I die and go to hell” and wondered “why dont I truly live & go to heaven”?”

The virtual war started Friday after re-tweeting an image of Martin’s body. The original tweet included the caption “Z-Man is a one man army,” and apparently — judging by previous tweets — refers to Zimmerman’s involvement in a child support case. 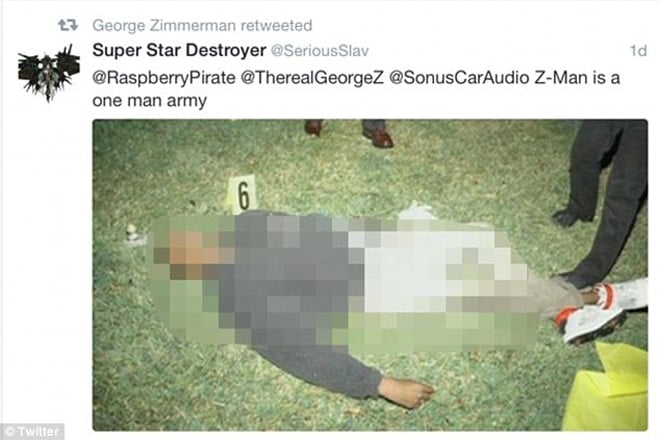 Zimmerman’s controversial re-tweet, which led to the usual Zimmerman is a “miserable excuse for a human being” comments is no longer visible.

Since his 2013 acquittal of the murder of Martin, Zimmerman has been in and out of the spotlight for a slew of controversial reasons, which often include getting arrested or expressing inflammatory comments.

Last month, he decided to auction his paintings of his take of the Rebel Flag in order to support a Florida gun store, which banned Muslims, for its ongoing civil suit against a religious group.