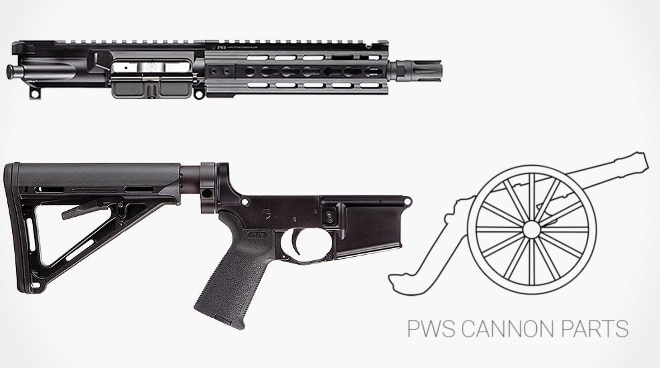 Primary Weapons Systems is moving forward with the “Cannon Parts” online store to sell off components with minor blemishes at a discounted price.

The new store currently offers a nice spread of parts including complete rifle and pistol blem lowers, stripped lower receivers, assembled rifle and SBR/pistol uppers, handguards, buffer tubes and even apparel. All of the Cannon Parts are 30 to 40 percent less than list prices.

For instance, the hard-use long-stroke piston system uppers, complete with bolt carrier group and charging handle, normally run around $1,449. From the Cannon Parts store these uppers sell for only $1,000, just because they don’t meet the company’s standards in the looks department.

Finished lower receivers have discounts up to over $200, and handguards and buffer tubes list for $50 to $100 less than retail. They’re featured parts, with KeyMod slots on the modular, free-floating handguard, an anti-tilt buffer tube extension and quick detach sling sockets everywhere.

The company said the parts are in no way functionally compromised and the flaws are entirely cosmetic. Blemishes include laser engraving errors, flaws in the finish and scratches from mishandling. By nature Cannon Parts are all limited in supply.