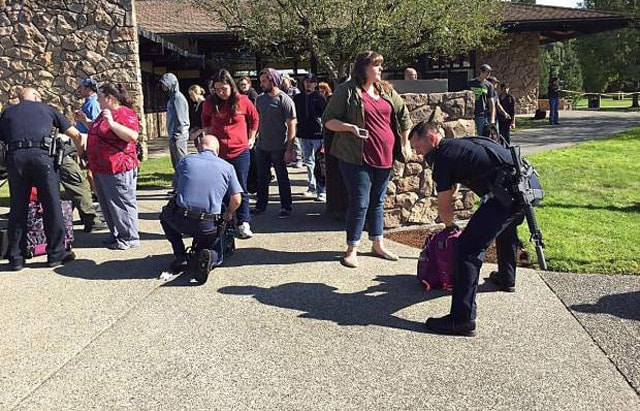 A mass shooting incident Thursday resulted in multiple casualties at Umpqua Community College just outside of Roseburg, Oregon, according to reports.

Douglas County Sheriff John Hanlin held a press conference this afternoon. He said he could not confirm an approximate number of victims killed or injured.  No officers were injured and there was no armed security on campus.

However, the Oregon Attorney General Ellen Rosenblum told NBC News that 13 people had been killed, and other reports indicate an estimated 20 injured.

Hanlin said the gunman died after a brief shootout with police officers. Officials described the gunman as a 20-year-old male.

The scene is now “secure,” but the investigation is still very active, said Hanlin. Both local and federal authorities are currently investigating the scene.

The Douglas County Sheriff’s Office issued a statement saying authorities responded to a 911 call at about 10:38 am Pacific Standard Time, and said students and faculty members are being bused to the Douglas County Fairgrounds.

Roughly 3,300 students and 16,000 part-time students attend Umpqua College, which is located about 10 miles north of Roseburg, which is the most populous city in Douglas County, Oregon. The city has about 22,000 people and it’s located 180 miles south of Portland.

Media and individuals are sharing thoughts, stories and comments on the incident on Twitter at #UCCShooting.

This story is still developing.