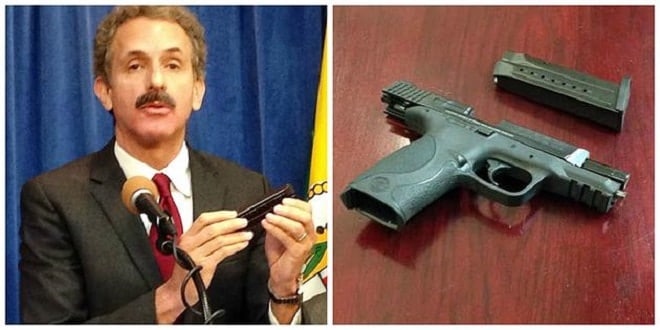 A security guard employed by the Los Angeles County Sheriff allegedly purchased a gun from a licensed dealer on behalf of a friend who later used it in a murder.

Indicted under multiple criminal charges is Amelia Suarez, a civilian employed by the sheriff’s office as a security officer at West Los Angeles College. According to a statement from City Attorney Mike Feuer, Suarez acted as a straw buyer when she purchased two Smith and Wesson M&P9 pistols from Botach Tactical along with six 17-round magazines last October.

The guns, not listed on California’s handgun roster among those approved for sale to civilians, were purchased under a law enforcement exemption to which Suarez, who was not a sworn officer, was not entitled. Further, according to officials, she purchased one of the guns with the intention of selling it on to a long-time family friend.

The transferred gun was later linked to a murder in Riverside County.

Suarez was charged this week with the sale of a large capacity magazine, conducting a firearms transaction without a license, furnishing incorrect information, and purchase of more than one gun in a 30-day period, all violations of California law. All told, she faces up to 30 months in jail and fines of over $2,000 if convicted on all charges.

Barkochba Botach, a licensed federal firearms dealer and owner of Botach Tactical, was also charged with sale of a large-capacity magazine and sale of more than one handgun within a 30-day period. Both charges carry a term of up to one year in prison and a $1,000 fine.

“Our gun laws can prevent tragedies. But when those laws are circumvented there can be dire consequences,” said Feuer, an inaugural member of Prosecutors Against Gun Violence. “It’s critical that firearms dealers comply with rules designed to protect the public.”

The news comes amid an ethics investigation into the actions of 42 Los Angeles police officers who bought $27,000 worth of discounted Smith and Wesson pistols. The officers used a one-time bulk buy to acquire 67 guns at prices about $130 off the already reduced price of $455 offered to law enforcement officers while the city was pursuing a contract with S&W to supply sidearms to the LAPD.

Arraignment for Suarez and Botach is set for Oct. 15.