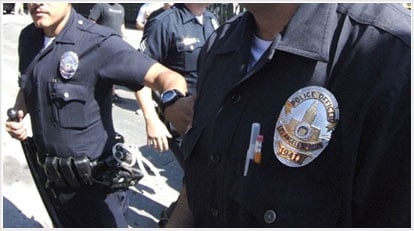 Los Angeles police officers who privately bought tens of thousands of dollars worth of guns at a discounted rate during the 2014 SHOT Show didn’t do so knowing they were violating the city’s ethics rules, officials said this week.

A report from the department’s independent watchdog, released Tuesday and obtained by the Los Angeles Times, claims the officers violated ethics codes in the $27,165 purchase of Smith & Wesson duty pistols.

“There are some things we could have done a little bit better on,” LAPD Chief Charlie Beck said during a press conference. “Do I think there was any evil intent? Absolutely not. Do I think that the officers willingly violated any of the ethics codes? No, I do not.”

The officers didn’t route the transfer through the proper channels, which include the Department Policy and Procedures Division and the Supply Section of Fiscal Operations Division, which would have procured the guns inside of the city’s established rules governing acquisitions from vendors, the Inspector General’s Office wrote.

Those departments are also typically responsible for product evaluation and the competitive bidding used to ensure the city is getting more bang for its buck in an ethical manner.

Several members within the training division of LAPD’s Firearms and Tactics Section were involved in most aspect of the acquisition, Inspector General Alex Bustamante wrote.

After the contract was awarded to Smith & Wesson, the officers requested the company provide their unit with a discount on privately-purchased firearms.

In violation of the city’s ethics rules, the officers used their position and relationship with the firearms manufacturer to obtain discounted firearms and magazines to be used exclusively by members of the unit, the report said.

Though the officers did seek department approval to purchase the guns, they didn’t go through the proper chain of command, but instead went to a staff officer. In total, 42 FTS officers purchased 67 pistols, which amounted to about $405 for each gun and magazine set, which is well below the already discounted price afforded to law enforcement officers.

Because the training officers received a $125 to $130 discount per gun, a portion of the purchase could be considered a gift in excess of the allowed limit, which would then be a violation of the city’s ethics codes, according to the report.

The officers paid in cashier’s check and the guns were then shipped to the Los Angeles Police Revolver and Athletic Club, a federal firearms licensee in Elysian Park.

Bustamante recommended LAPD change its policy on product evaluations, directing all such testing be conducted through its procedures division. He also recommended more training on ethics for officers.