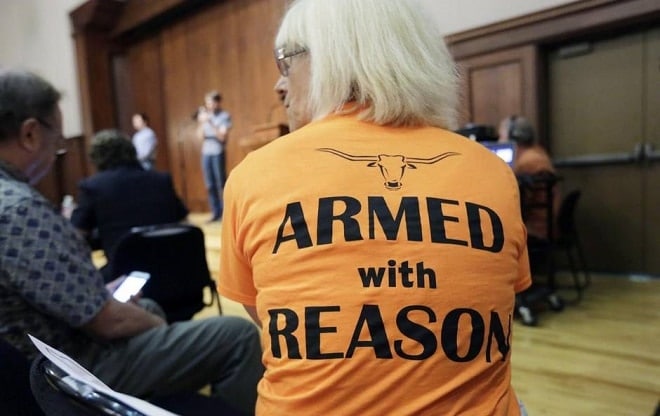 A public meeting to discuss the mechanics of campus carry at UT was heavy on anti-gun speakers. (Photo: Eric Gay/The Associated Press)

Reports from the first public forum on how to implement mandated campus carry at the University of Texas were that most speakers were against it.

After a series of compromises, a measure to allow licensed concealed handgun permit holders to carry their guns on college campuses passed the state legislature earlier this year and was signed by Gov. Greg Abbott (R) into law. Set to take affect Aug. 1, 2016, the law allows university presidents to carve out some areas that will remain gun free zones.

Just what those areas will be is at the core of the discussion.

Both the Morning News and UT’s college paper, the Daily Texan, reported a strong majority of speakers leaned towards Neuberger’s feelings on guns on campus and in class.

As of the end of September, more than 160 UT professors have signed a Google document declaring they would not allow students with CHLs to carry in their classrooms.

“If you implement very strict laws that ban guns in buildings such as the Union, the PCL [Perry-Castañeda Library], you are essentially banning campus carry in general,” said Andrew Jackson, a business junior. “If you ban guns in the PCL or the McCombs School of Business where I’m a student at, you effectively ban me from exercising my rights.”

Open Carry Texas President C.J. Grisham was on hand for the meeting and downplayed the anti-gun rhetoric.

“I want to make sure all sides are being heard in this debate,” said Grisham. “This topic is not much of a debate because the law already passed. This should be nothing more than an education effort for people.”

UTs working group will deliver their recommendations in December.