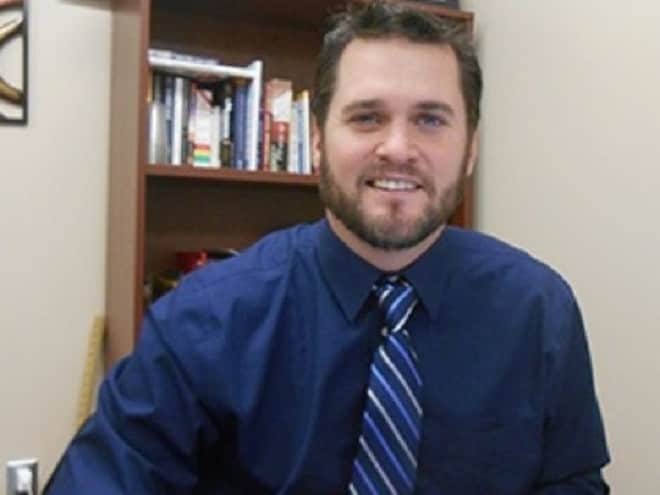 Vice Principal Ryan Rollinger rushed to the take on a 16-year-old student who had just shot the principal of a South Dakota high school Wednesday.

The incident began about 10 a.m. when an unidentified teen entered the school near Sioux Falls and proceeded to the office where he soon became engaged in an altercation with Principal Kevin Lein, as detailed by Sioux Falls Police Officer Sam Clemens in a press conference.

During the struggle, the student produced a handgun and shot Lein in the arm.

It was at that point that Rollinger, 39, who also serves as Harrisburg’s assistant football coach, rushed in to tackle the teen then held him down with the assistance of Activities Director Joey Struwe until police arrived.

School officials state the fast actions by Lein, Rollinger and Struwe may have saved lives.

“You really never know what this student would have done if they hadn’t confronted him,” said Jim Holbeck, superintendent of the Harrisburg School District, as reported by the Argus Leader. “If he already shot once, who knows?”

Holbeck reports that Lein is hospitalized in good condition.

While the district conducts regular active shooter drills, Wednesday’s actions still came as a shock to the system.

“For years we’ve been — schools have been trying to figure out how to prepare for this,” Holbeck said. “And you hope it never happens in your backyard.”

Jim Dorman, a colleague of Struwe’s, said the activities director helped organize training events on how to respond to active shooters on campus.

Gun control advocates were quick to condemn the event while calling for increased gun laws, although it is not currently known how the teen obtained his firearm.

“Today’s shooting at a high school in Harrisburg, South Dakota, was the 44th American school shooting this year,” reads a statement without citation posted by Moms Demand Action just hours after the incident. “Since the December 2012 shooting at Sandy Hook Elementary, there has been an average of nearly one school shooting every week. How many more before our leaders pass commonsense laws to prevent gun violence and save lives?”

The Bloomberg-supported organization’s message was echoed by the Coalition to Stop Gun Violence, who posted, “It’s time to get our volume level way up and demand immediate changes to our gun laws.”

The individual detained by Rollinger was arrested by police but has not been charged at this point.