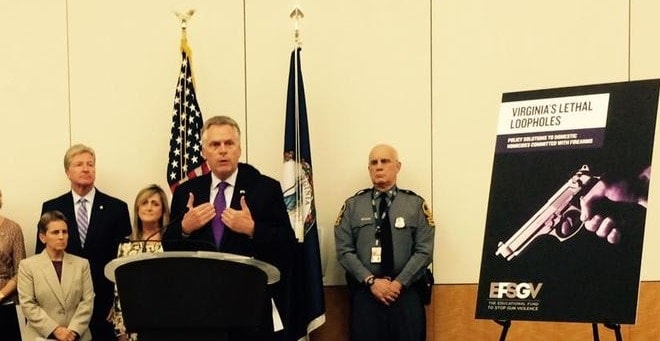 Virginia’s governor and attorney general were on hand Wednesday at the state capitol to back a list of recommendations from gun control advocates.

Armed with a study provided by the Educational Fund to Stop Gun Violence (Ed Fund), a sister organization of the Coalition to Stop Gun Violence, Gov. Terry McAuliffe and Virginia Attorney General Mark Herring challenged lawmakers to close what the report terms “lethal loopholes” in the state’s domestic violence laws. Among the proposals is one to impound firearms from the scene of any domestic violence complaint.

“Too many abusers can still get a gun and inflict violence on their partner or their family members and that’s why we need the legislature to step up and say, ‘We stand with survivors of domestic violence,'” said Herring.

The report from the Ed Fund proposes to enhance state laws to: