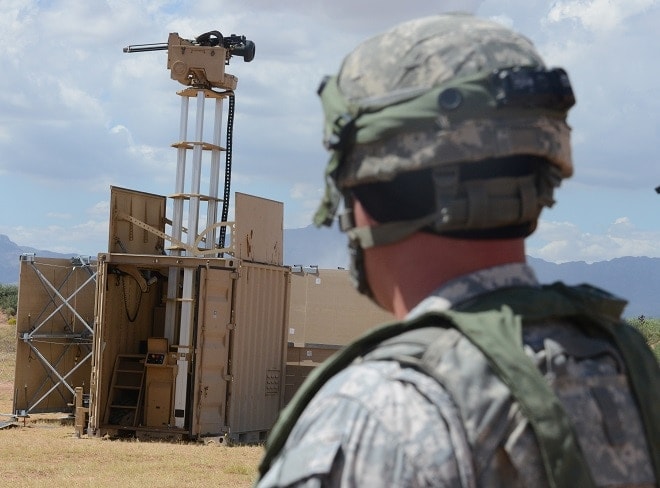 The remote control turret can accommodate a number of weapons systems. (Photo: U. S. Army)

In an effort to get more muzzles on the perimeter with fewer Joes on the wall, the military is trialing the new Tower Hawk system.

In a series of tests at an expeditionary outpost set up in the scrub of Ft. Bliss, the Army is testing some remote guard towers in a can.

Shipped in a standard connex, the Tower Hawk is a containerized weapons system that can be set up by a team of six soldiers in under an hour. Atop the container is a mount that can accept anything from a mini-gun to a Browning M2 .50-caliber machine gun or a .338 Lapua sniper rifle. Video feeds with thermal and infrared views loop the tower into the post’s overall defense network and augment traditional base security.

The weapons can be raised, lowered, rotated by 360-degrees and fired remotely by soldiers safely buttoned up in a bunker and allow a single operator to control it whereas a conventional combat outpost takes four to six soldiers doing eight- or 12-hour shifts to man one weapons system on the perimeter.

“Every Soldier I have assigned to securing the perimeter is one I don’t have that can execute support missions,” said Lt. Col. Raphael Heflin, commander, 142nd Combat Service Support Battalion, 1st Armored Division in a release from the Army.