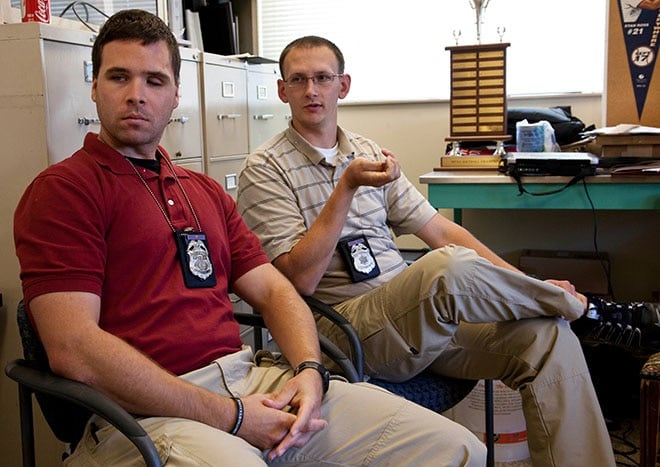 In this Sept. 9, 2009 photo, Milwaukee police officer Bryan Norberg, right, and Officer Graham Kunisch talk in their captain’s office in Milwaukee. Norberg and Kunisch were both shot on June 9, 2009, by Julius Burton. (AP Photo/Morry Gash)

The clerk who sold a gun eventually used against two Milwaukee police officers testified in court Thursday, saying he didn’t remember the 2009 transaction after being shown a video in court.

Julius Burton – the man who shot officers Bryan Norberg and Graham Kunisch during a traffic stop in July 2009  – was shown in the video looking over the shoulder of Jacob Collins, who struggled to fill out the required paperwork for Badger Guns, the Milwaukee Journal-Sentinel reported.

Collins made several errors while filling out the form, like checking “no” on a question asking if he was the actual buyer. That item was crossed out and Collins then checked “yes,” ABC’s WISN reported.

“He did seem to have trouble with written word and the forms,” employee Donald Flora said.

Flora told the court he couldn’t remember receiving specific training in 1995 when he started working for the gun dealer – known as Badger Outdoors then – in how to identify straw purchasers who attempt to buy guns for people not legally permitted to do so. He also reportedly said he has stopped buyers in the past who made him suspicious.

“The last thing we want to do is put a gun in somebody’s hands that’s going to commit a crime or use it for the wrong purpose,” Flora said.

The officers’ lawyer asked Flora if it was typical for a gun buyer to spend 40 minutes on a purchase form, to which he responded that it was not.

“The counter from the place where people sit to fill out the forms … there was a poster on the wall. Same message telling customers trying to buy guns that there are serious consequences for buying a gun for another person,” Badger attorney James Vogts said, unfolding a poster reading “Don’t Lie for the Other Guy.”

Collins was said to have then left the store to get more money for the purchase. He is named in the suit along with the gun store, now called Brew City Shooters Supply. Burton is currently serving 80 years in prison for the shooting, which caused Kunisch to lose an eye and suffer a serious bran injury.

A Journal-Sentinel investigation found that the gun shop in 2006 – when it went still by the name Badger Outdoors – was given a pass by federal investigators for offenses that could have shut the shop down. It then underwent some minor personnel changes and the son of the owner, a longtime employee, was issued a new license to run the shop under the new name.

All three stores are located at the same address and operated by members of the same family under the father, Walter Allan. According to court documents, his son, Badger Guns owner Adam Allan, as the sole owner and under limited liability, could not have aided and abetted the company’s alleged wrongful act.

Allan and others associated with the business were either not at the store or not part of the transaction between Collins and Flora, court documents state.

This isn’t the first time Badger has been accused of negligence. The gun shop has a notorious reputation for selling guns recovered by police in crimes and has been responsible for at least six police injuries caused by guns it sold from 2008-2010, according to a 2012 Milwaukee Journal-Sentinel report.

The newspaper reported that Badger Outdoors and Badger Guns have been selling crime guns for more than a decade.