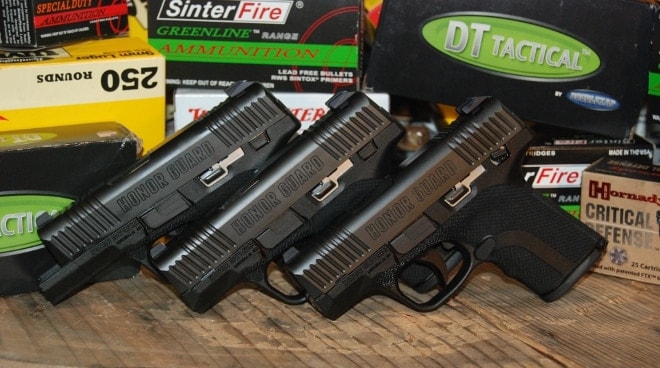 Honor Defense is a new manufacturer of compact handguns operating out of Gainesville, Georgia. They’re about to launch a spread of slender subcompacts built from the ground up with concealed-carry in mind, called the Honor Guard.

We spoke with Honor Defense founder Gary Ramey who explained that while the company may be new, the staff has a lot of experience in the industry, and is currently made up of former Beretta and Remington employees.

“Honor Defense has been in the design phase for over a year,” said Ramey. “The pistols are designed to be comfortable, reliable and durable.” Like many concealed-carry pistols, they are polymer-framed, striker-fired handguns. They have interchangeable backstraps to suit a variety of hand shapes and sizes, and tall, recessed slide serrations front and rear. All are chambered for 9mm Luger and feed from 7- or 8-round magazines. 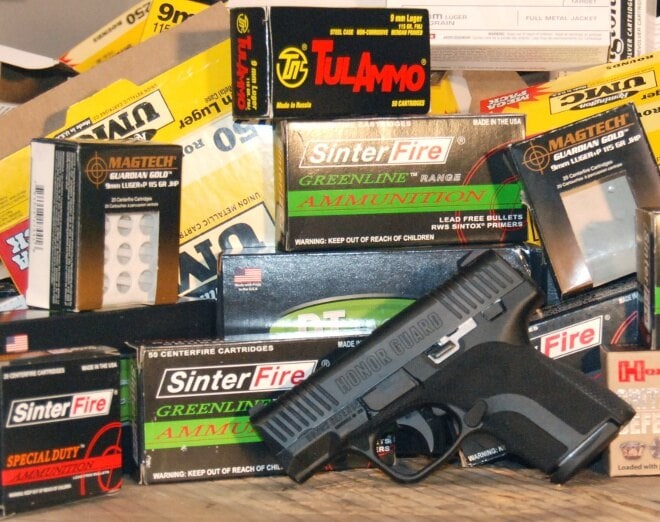 “For the first prototype, we started with 30 +P proof loads and then fired 5,000 rounds utilizing 17 different types of ammunition. We made some tweaks and then confirmed changes in prototype number 2 with proofing and then 5,000 rounds in two-and-a-half days.”

The Honor Guard series is expected to roll out in November through regular distribution channels with three models, one with manual safeties, one without manual safeties and one without the thumb safeties with an extended frame. The extended frame can be used as a standoff device that prevents the slide from being pressed out of battery in case of physical contact with the muzzle of the handgun.

The standoff device is a feature that’s pretty unique to the Honor Guard called the FIST frame, but an out-of-battery discharge — a potential reality in a self-defense situation — may not only disable the gun, it can seriously injure the person holding it. The FIST frame reduces the risk of an out-of-battery discharge without disabling the gun, preserving the shooter’s ability to safely and reliably pull the trigger in an extreme close-quarters situation.

All of the Honor Guard controls are fully-ambidextrous, including the slide catch, optional manual safety and magazine release. They use a wide, flat-face trigger that’s set to break at 7 pounds, with a short reset for fast, accurate shot placement. They have 3.2-inch barrels, weigh 22 ounces and are only .96-inches wide thanks to the thin controls.

They are all competitively-priced with a $499 MSRP, and entirely made in the USA. All of the components and materials are sourced from U.S. suppliers with all of the manufacturing and assembly done Stateside, something they take pride in. “Every part in the firearm is made in the USA with American-owned suppliers and we also specify domestic material,” said Ramey. Each pistol will ship with two magazines, one flush and one extended, an extra backstrap and a spent shell casing to prove it passed the proof testing.

This is just the beginning for Honor Defense. They have big plans and if everything goes well, they will soon have more models with longer slides and barrels as well as even smaller models. Other cartridges will be added to the mix, too, to give shooters more options. We look forward to getting some hand-on time with the Honor Guard, and telling you all about it.