No motive yet in Oregon college shooting; 10 dead, 7 injured 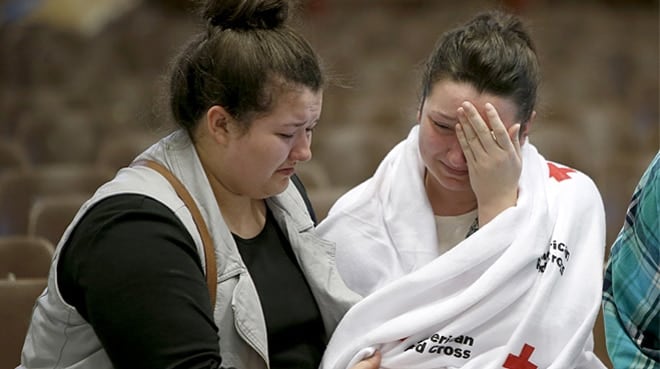 Hannah Miles (right), a student at the college, heard the gunshots as they were fired just one classroom over. (Photo: Andy Nelson / The Register-Guard)

A shooting at Umpqua Community College in Roseburg, Oregon, claimed the lives of 10 people, while another seven were injured, the Douglas County Sheriff’s Office confirmed in a statement late Thursday.

Authorities received a 911 call at 10:38 a.m. after the gunman entered a classroom and opened fire. Although it has not yet been confirmed, some reports indicated witnesses said the suspect ordered all of the students to get down, then individually asked them to stand up and state their religion before pulling the trigger.

Within minutes, two police officers, who Douglas County Sheriff John Hanlin described as “heroic,” arrived on the scene. The suspect died following a brief shootout with authorities, although it is not known at this time if he was killed by responding officers or caused his own death.

A team of law enforcement officials, including tactical units and bomb technicians, worked to clear the college room by room and searched the students and the hundreds of cars on campus to ensure all threats were gone. At this time, authorities believe the gunman acted alone and residents are in no further immediate danger. 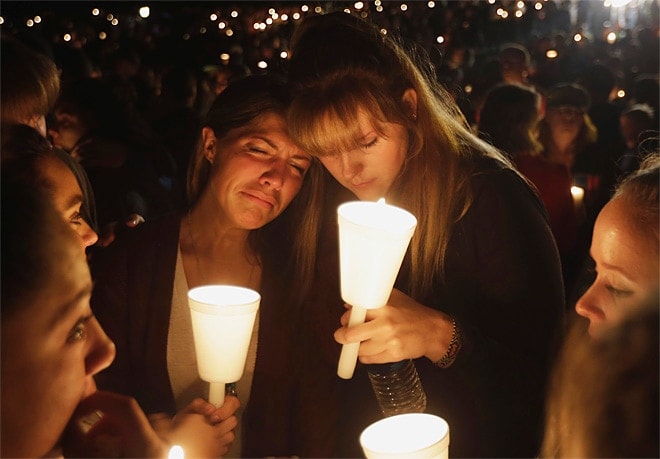 A candlelight vigil was held Thursday night for the victims of the Umpqua Community College. (Photo: Rich Pedroncelli/AP)

Hanin confirmed the injured victims were transported to a local hospital, but three victims – who were critically injured – have since been transferred to other facilities. Hanin added that the focus at this point is on the victims and their families, as authorities go through the painstaking process of identifying all of those involved. Hanin said the incident is being treated as a “mass casualty incident” and that certain protocol must be followed. The earliest he expects the names of the victims to be made public is possibly Friday.

Hanin added that, although the official identification will come from the medical examiner’s office, they have information that leads them to believe they know the identity of the suspect. However, a government official, not authorized to speak publicly and under the condition of anonymity, unofficially identified the suspect as 26-year-old Chris Harper Mercer, a student at the college. Hanin said he would not identify the suspect publicly.

“Let me be very clear,” he said in a statement. “I will not name the shooter. I will not give him credit for this horrific act of cowardice. Media will get the name confirmed in time … but you will never hear us use it.”

Hanin further called for avoiding glorification or otherwise sensationalism of the suspect or his actions, asking attention be focused on the victims and families instead.

The Oregon State Police, local law enforcement and the Federal Bureau of Investigation are looking into the incident and have not yet released a motive for the shooting.

Obama on Oregon shooting: ‘Somehow this has become routine’

A shooting at Umpqua Community College