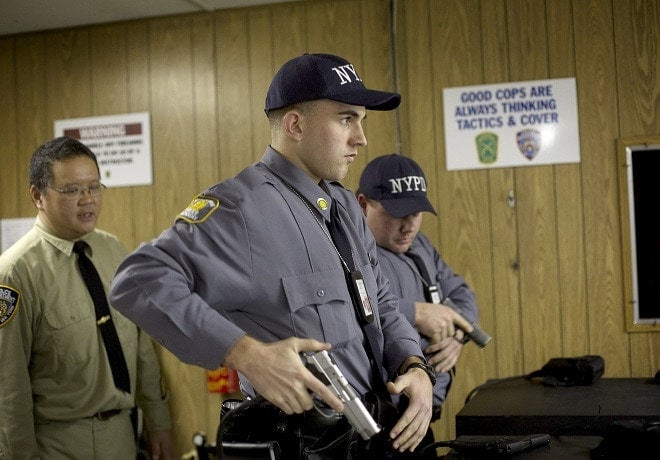 Recruits at the NYPD Academy have a choice of either Smith and Wesson, Glock or Sig Sauer handguns, and receive 13 days of firearms and tactical training. (Photo: Victor J. Blue/New York Times)

The New York Police Department released its annual firearms discharge report for 2014 on Thursday and noted an overall decline in incidents.

As detailed in the 82-page report, of the NYPD’s approximately 35,000 uniformed officers, 58 officers were involved in a total of 35 incidents of intentional firearms discharges resulting in 14 injured subjects, and eight killed. In return, two officers – Rafael Ramos and Wenjian Liu – were shot and killed and another two wounded while four committed suicide.

The numbers are an all-time low for a metropolis that in 1971 saw 12 officers and 93 subjects killed in gunfights around the city.

Further, the use of guns by officers against animals continues to decline to a 10-year low, with 18 incidents recorded last year compared to 27 in 2014.

“These data are a testament to police officers’ restraint, diligence, and honorable performance of duty,” states the report. “But they also show that, over the past four decades, attacks on both police and citizens have steadily declined. The drastic reduction in violent crime over the past 25 years is sociologically reflexive: as crime decreases, criminals, and police enter into less criminal conflict.”

In all, officers from the largest municipal police department in the nation fired 282 rounds, an increase of nearly 14 percent from 2013’s figures. In addition, there were 18 unintentional discharges reported compared to just 12 the previous year.

Of the 35 officer-involved shootings with suspects, slightly over half (18) occurred in Brooklyn while Manhattan saw just four. Some two-thirds of incidents occurred outdoors, primarily on city streets and sidewalks.

While officers are encouraged to carry off-duty, just one shooting involved a lawman who was carrying away from work.

In all, some 103 NYPD officers fired their weapon in 2014 outside of the range and in 41 percent of the incidents just one round was discharged. The most rounds fired during any one incident was 29 and the most by any officer at one time was 12 rounds.

Information on the realities of modern urban gunfights surfaces in the report in the respect that, in 34 of 35 incidents, officers engaged a suspect at ranges of closer than 15 feet. Delving into handgun tactics, a third of officers were forced to fire using a one-handed grip, only three were able to fire from behind cover and 36 percent reported firing in low-light situations.

As for demographics, the 34 apprehended suspects involved in shootings with the NYPD last year on average were black (75 percent), male (94 percent) and under 26 years of age (47 percent).

The report comes as Mayor Bill de Blasio and Police Commissioner William J. Bratton announced sweeping changes to the department’s use-of-force policy. The changes include a clear definition of the levels of force, establishment of an independent 54-officer Force Investigation Division mandated to follow up on all firearms discharges and increased training in conflict de-escalation at all levels.

Further, Bratton pledged to release a transparent use of force report annually to accompany the firearms discharge statistics.

“Officers are more restrained than ever with their firearms because they have clear rules, they know there is oversight, and they train throughout their careers,” Bratton said. “We are now applying same policy, oversight and training principles to all uses of force, not just firearms.”