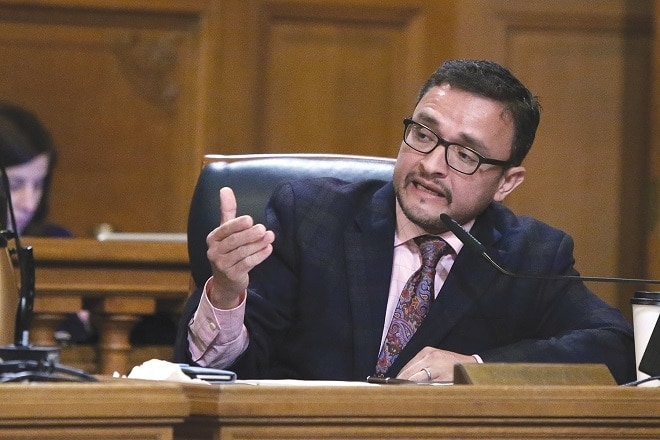 With three guns stolen from the cars of law enforcement officers in recent weeks, including one used in a high-profile murder, a San Francisco lawmaker wants a change.

Supervisor David Campos this week introduced a package of public safety proposals designed to address shortcomings exposed in the aftermath of the fatal shooting of Kathryn Steinle on San Francisco’s Pier 14 in July.

In that incident, the suspect Juan Francisco Lopez-Sanchez, a Mexican national with at least five deportations under his belt, allegedly used a Sig Sauer handgun stolen from the vehicle of a U.S. Bureau of Land Management ranger that was left loaded and unsecured on the seat.

While the city has some of the strictest gun control laws in the nation, including controversial mandatory gun lock requirements for gun owners, aides for Campos confirm that for San Francisco law enforcement agencies, “this policy does not already exist.”

One of Campos’s proposed ordinances, filed on Sept. 29, would specifically prohibit San Francisco city peace officers from leaving an issued firearm in a personal vehicle. The only exception would be if the gun was secured in a locked container or locked truck separate from the main cabin of the vehicle.

Kathryn Steinle’s family are currently perusing claims for damages from the BLM, San Francisco Sheriff’s Department and U.S. Department of Homeland Security, claiming the ranger’s weapon was left loaded and in plain view in his car.

On Aug. 21, UC Berkeley Police Chief Margo Bennett had her department-issued handgun stolen from her vehicle at the Point Isabel Regional Shoreline in Richmond. Bennett left the firearm as well as personal items in the cargo compartment of her Ford Escape while jogging.

“I feel terrible about the loss of department equipment and I am heartsick over the loss of irreplaceable personal items,” she said.

Just a week later a Hayward police officer assigned to a regional drug task force had his vehicle looted of a .40 caliber pistol with four magazines and personal items while it was parked near a Starbucks in Oakland.

The proposed ordinance has been referred to the Public Safety and Neighborhood Services Committee who are obligated to act on it within 30 days.