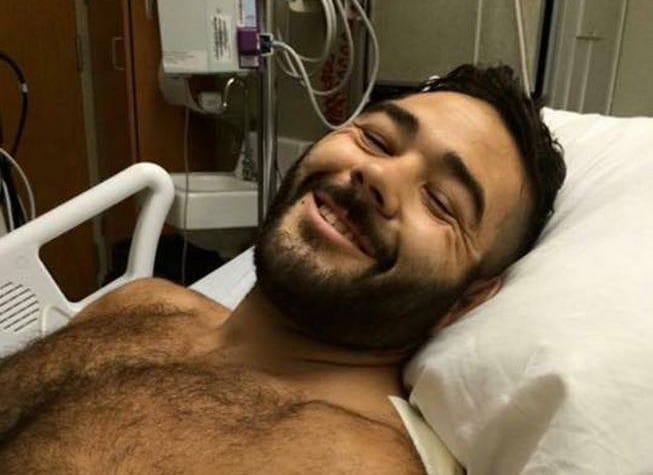 Relatives were shocked, but weren’t completely surprised to hear that Chris Mintz was one of several people wounded while trying to intervene in a fatal mass shooting on a community college campus in Oregon this week.

The 30-year-old Umpqua Community College student was combat trained in the Army infantry, where he served for 10 years, part of that time deployed to Iraq. Mintz also had wrestling and mixed martial arts experience, which he used twice to compete in amateur MMA contests in 2011 and 2012, the Washington Post reported.

Mintz was shot three times Thursday morning after he reportedly sprung into action to block the door of a classroom in an attempt to keep the gunman out. The veteran told the shooter it was his son’s birthday, but that didn’t seem to deter him from shooting the veteran several more times while he lay on the ground bleeding. In total, Mintz was shot seven times, but was in stable condition Friday, hospital officials said, reported USA Today.

Others weren’t so lucky. The gunman killed nine people and injured nine others before officers shot and killed him, Reuters reported. Authorities said if it wasn’t for Mintz’s heroic actions, more people could have been killed.

The incident began with the gunman shooting a professor in the head, then, one by one, ordered students to stand up and state their religion before reportedly shooting them.

Following the Oregon shooting, gun rights advocates defended their stances on issues of mental health, background checks and so-called gun-free zones. Researcher and gun rights advocate John Lott took to Twitter the day of the shooting to remind the public that the college prohibits guns.

But that’s not really the case, said gun control group Everytown for Gun Safety, in a statement emailed to members of the press Thursday:

Oregon law actually forces colleges to allow guns on campus grounds.  Oregon is one of a small minority of states that forces colleges to allow guns on campus in some circumstances.  Historically, Oregon colleges prohibited guns on campus, but a 2011 court case found that state law prevented them from establishing rules prohibiting guns throughout campus. The exact scope of the court case remains unclear; what’s certain is that public colleges cannot keep guns off campus entirely. As a result of that case, the state’s major public universities have had to modify their policies and now must at least allow visitors to carry guns on campus grounds.  At the time of the shooting, Umpqua Community College had as strong a policy as Oregon law permits, which necessarily fell short of a full prohibition.  The college’s policy acknowledged that some campus carry activity was “expressly authorized by law” and beyond the school’s control.

President Obama in an address Thursday night expressed frustration over yet another mass shooting.

“Somehow this has become routine. The reporting is routine, my response here at this podium ends up being routine, the conversation in the aftermath of it, we’ve become numb to this,” Obama said.

The president called on gun owners to question the gun lobby, which has been successful in stymying gun control efforts in Washington and on the state level for years.

“Think about whether your views are properly being represented by the organization that suggests it is speaking for you,” he said.

Lott criticized the president for speaking in favor of background check laws while it was still unclear how the Oregon college gunman obtained his firearms.

“And even more important … the 15 times that he’s spoken out, in not one of those cases would the laws that he’s advocating have had any impact on whether these crimes occur.”

There’s a disconnect, Lott said, between the statements being made by the president and other public figures and the laws being pushed.

Lott is author of the book More Guns, Less Crime, which has become somewhat of a mantra in the gun rights community, akin to “The only thing that stops a bad guy with a gun is a good guy with a gun,” as the NRA’s Wayne LaPierre has said. The thinking behind the two statements is that law-abiding gun owners can and do stop crime. The theory flies in the face of research conducted by gun control advocates like Philip Cook, who argue just the opposite – that more guns mean more of a chance for criminals to obtain them. If Cook is correct, then more guns create more opportunity for armed good guys to stop armed bad guys.

“Media and community members who publicize his name will only glorify his horrific actions,” Hanlin said. “And eventually, this will only serve to inspire future shooters.”

The sheriff isn’t alone in his unwillingness to give mass shooters the glory many of them seek in carrying out their killings. The Oregon college is the latest in these types of acts, number 295 this year, by one count, and the 142nd shooting incident in a school or college since the 2012 Sandy Hook shooting in Newtown, Connecticut, according to another. There really is no general consensus on how to categorize a mass shooting.

While there are calls on both sides of the gun control and gun rights debate to refrain from using tragedy as a means to further their political agendas, many may agree that only good can come from telling the stories of the victims and the heroes.

Hailed as a hero by many, Mintz has received national fame. A GoFundMe account was set up to pay his hospital bills, USA Today reported, and has received more than $393,000 from 12,094 people in just 10 hours.

Both of Mintz’s legs were broken during the altercation and he’s expected to have to undergo extensive physical therapy.

“He’s going to have to learn to walk again, but he walked away with his life, and that’s more than so many other people did,” said Ariana Earnhardt, Mintz’s cousin.