Brady group calls for Oregon sheriff to step down 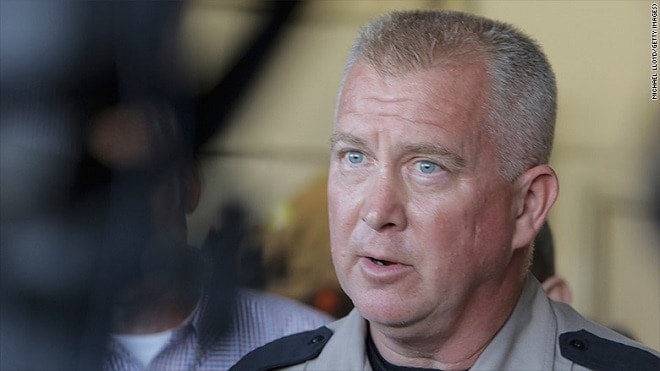 The Brady Campaign on Monday demanded Douglas County Sheriff John Hanlin step down following the discovery of comments he made against gun control.

Hanlin, who has in many ways been the public face of the law enforcement response to the Umpqua Community College shooting that left 10 dead, made headlines soon after the tragedy by refusing to name the suspect, saying in part, “I will not give him the credit he probably sought.”

While the Brady Campaign isn’t mentioning Hanlin’s stand on that subject, they are calling him to task for a 2013 letter penned to Vice President Joe Biden just days after the Sandy Hook Elementary shooting in Newtown, Connecticut.

“Gun control is NOT the answer to preventing heinous crimes like school shootings,” Hanlin wrote.

He then followed this up with subsequent comments posted online apparently questioning both Sandy Hook and the attacks of Sept. 11, 2001; voicing concern they may have been staged by the federal government.

It is those comments that have the Brady group – which characterized Hanlin as a conspiracy theorist – seeing red.

“John Hanlin should tender his resignation from the Douglas County Sheriff’s Office and be immediately replaced as lead investigator on this case,” said Brady President Dan Gross in a statement emailed to Guns.com. “The victims of last week’s shooting and the entire community deserve a thorough investigation that will get to the bottom of this heinous crime – an investigation that must be grounded in facts and evidence, not myth and bias.”

Gross and his organization further advocate the sheriff step down over his public opposition and refusal to support expanded background checks on private gun transfers enacted by the governor in May.

“In pledging not to enforce the new law, John Hanlin has clearly demonstrated that his political ideology trumps his responsibility to protect his community,” Gross said.

Since the shooting at UCC, Hanlin has been vocal of his continued support for gun rights while distancing himself from allusions to a Sandy Hook plot.

“I know what you’re referring to, but that’s not a conspiracy theory that I have,” Hanlin told CNN Friday when asked of the comments.