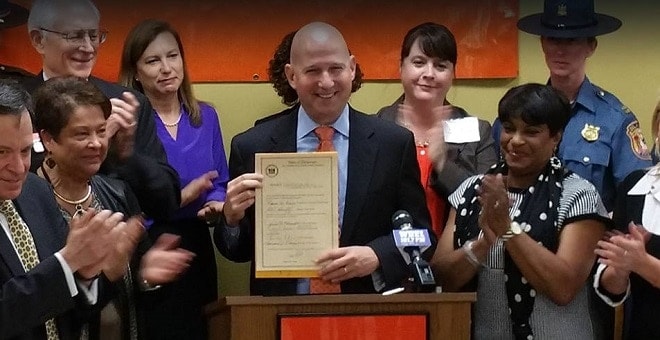 The measure, introduced in the Senate in June, passed that body 15-6 then sailed through the House 26-12; in each case largely on party lines.

Overcoming fierce opposition from gun rights advocates, it landed on Markell’s desk where the governor signed it on the occasion of commemorating October as Domestic Violence Awareness Month last Friday.

The legislation, SB 83, expands the term “misdemeanor crime of domestic violence” to include those in conflict who are dating or living together. Current state and federal law only applies the term to those who are married. Those so identified as such under the new statute would be banned from owning or buying guns for five years.

Further, the new law clarifies the process of surrendering arms by those affected by protection orders or domestic convictions and allows federal firearms dealers to hold impounded guns pending resolution in the case. Under new regulations, those forced to turn over firearms would have 24 hours to comply.

SB 83 was staunchly opposed by the National Rifle Association in its original form over concerns it would exceed both current Delaware and federal law and cause persons subject to order to lose their Second Amendment rights without due process due to the inclusion. After pressure, lawmakers added language to remove some temporary orders from firearms bans as well as allow guns to be stored at an FFL rather than turned in to police, although the measure gained few Republican votes.

The bill had extensive support from both national and local gun control advocates to include Everytown for Gun Safety, former U.S. Rep. Gabrielle Giffords’s Americans for Responsible Solutions and the Delaware Coalition Against Gun Violence.

“Today is a victory for common sense and a victory for safer communities,” said Giffords in a statement last week. “In the face of calls from Delaware’s domestic violence survivors and public safety officials, Republicans and Democrats came together to pass a law that helps keep guns out of the hands of domestic abusers and protect vulnerable people and their families. And with Governor Markell’s signature now affixed to this bipartisan proposal, Delaware will be a safer place to live.”