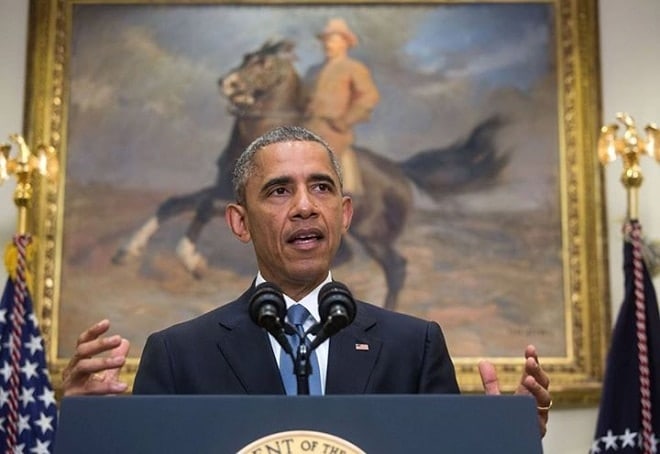 Gun control advocates are urging the President to take fast and unilateral action on guns in order to, “overcome the NRA’s aggressive opposition” in Congress. (Photo: whitehouse.gov)

A national gun control group on Monday sent a list of five proposed regulations to the White House they contend can be mandated without Congress.

“We know President Obama is open to these ideas, but to overcome the NRA’s aggressive opposition, we need to send an overwhelming message that we want real action now,” reads the petition, claiming 88 Americans are killed by gun violence every day.

“This report answers President Obama’s call to action in the wake of the horrific shooting at Umpqua Community College in Roseburg, Oregon, and offers five life-saving measures that the Administration could advance to keep guns out of the hands of dangerous people.”

First up would be an order to help cut back on the number of legal guns on campuses across the nation by directing the Bureau of Alcohol, Tobacco, Firearms and Explosives to catalog which state carry permits qualify under the Federal Gun Free Safe Zones Act for exemption of the current 1,000 foot rule for allowing firearms on school grounds.

This could potentially put a federal end-run on campus carry legislation at the state and local level.

Next, the group calls for more regulation on legal gun owners selling firearms from their personal collection by clarifying that a gun can only be considered part of a collection if it has been in the owner’s possession for a year. Further, it would require those who advertise guns for sale or sell more than a specified number of guns in a year to become licensed, ATF-regulated dealers.

The third recommendation is to create a framework for the ATF to investigate instances where a prohibited firearms possessor attempts to purchase a gun over the counter and fails a background check, while similarly notifying state and local authorities of the same.

A fourth action would order the Federal Bureau of Investigation to compile and publish more data on firearms background checks, specifically on if a check is done in a private sale or through a dealer.

“This information will help states determine the effectiveness of varying implementation and enforcement strategies, and help policy makers better understand how state background check procedures deter and detect dangerous people who would otherwise be able to circumvent background check requirements,” reads the report.

This could provide a more recent data pool to either support or counter the familiar yet outdated trope by anti-gun advocates that up to 40 percent of firearms sales are done privately and without background checks.

Finally, the gun control group seeks an order to the Department of Justice which would expand firearm bans on non-married individuals convicted of misdemeanor crimes of domestic violence. Current federal statutes only apply a lifetime firearms prohibition on those convicted of such offenses against spouses.

As noted by FBI statistics, misdemeanor domestic violence conviction records are the third most common reason for NICS background check denials. Between Nov. 1998 and Aug. 2015, some 117,451 checks were denied for that reason.

The White House has used political capital in the wake of tragic school shootings in the past to take administrative action.

In January 2013, President Obama announced 23 executive orders in the wake of the school shooting at Sandy Hook Elementary in Newtown, Connecticut, that claimed the lives of 26 students and faculty, to address what he called “the epidemic of gun violence.”