Fitness for shooters: The Combat Triad 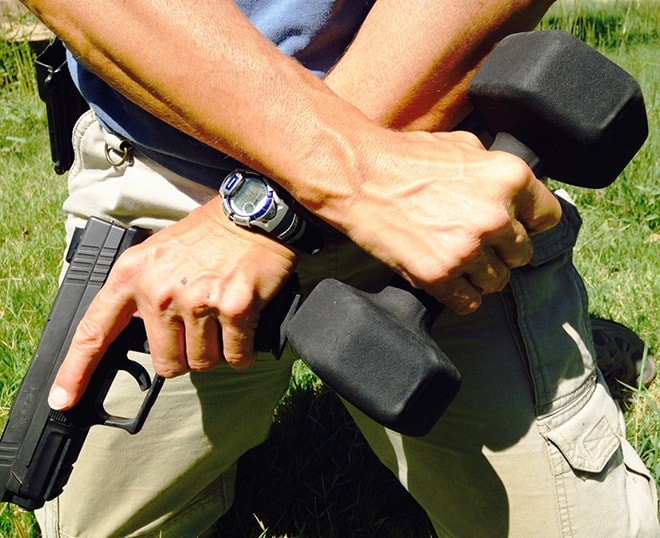 Concealed carry instructors like myself encounter a number of new gun owners who believe that the simple act of possessing a gun will insure their survival in the event violent crime comes their way. Likewise, I’ve a handful of friends, accomplished at rifle marksmanship to a level I hope to achieve someday, who quip, “that’s why I shoot a rifle, so I don’t have to drop my cigarette and run.”

This article is going to be one that spurs disagreement and criticism, and that’s alright.  The thoughts expressed here, I’ve earned as a shooter, self-protectionist and instructor.  It’s okay for people who’ve earned their opinions to disagree.

The Combat Triad and importance of mindset 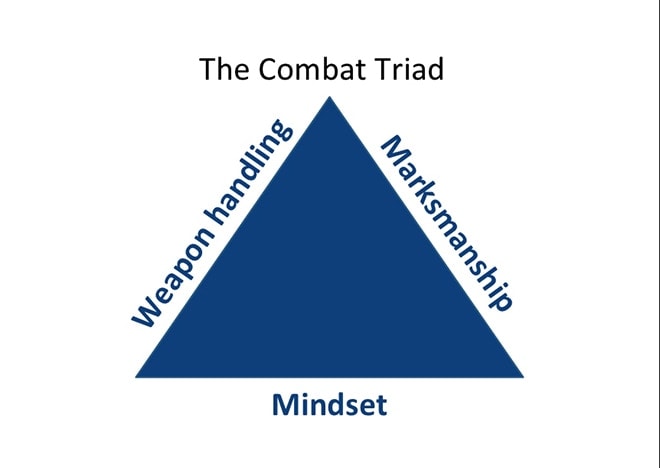 Cooper’s Combat Triad–not just for combat, but a way of structuring training on and off the range. (Source: Ben Phillipi)

Col. Jeff Cooper is credited with creating the Combat Triad, pictured right.  Most folks new to concealed carry believe that if they’re reasonably making hits on target, e.g. the marksmanship leg of the triad is under control, they’re good to go.  Most shooters, new and old, falter at the other two aspects.  We all need consistent practice with gun handling—drawing, malfunction-clearing, and reloading. And most people, by the time they’ve enrolled in a concealed carry course, have made the mental leap necessary for a civilized person to understand that there is a time and place for exercising deadly force on someone who’d otherwise be killing or maiming them.  This aspect of mindset is critical, but there’s more.

Rory Miller and Lawrence Kane, in their excellent book Scaling Force, describe the mindset aspect of the combat triad as one’s “mental, physical, and spiritual preparedness” for self-defense.  It’s a sensible explanation of the label, and a worthy tool for asking oneself, “how ready am I, really, to prevent the loss of my own or another innocent party’s life?” Each of us is somewhere on a scale of 0-100 in terms of mindset.  In my observation, people who are new to shooting tend to underestimate the importance of mindset or adopt a squeamish air while discussing their own.  Conversely, lifetime shooters often overestimate their abilities but then falter when faced with scenario-based deadly force decisions.

For the sake of space, this article addresses only the physical fitness aspect of mindset. Not that I’m a paragon of fitness or have a degree in exercise physiology. What I do have is experience as a shooter and instructor, living in a body that has old injuries and stays relatively fit despite a fondness for chocolate and beer.

There are many aspects to physical fitness… strength and cardiovascular (“cardio”) are the two obvious ones. These are certainly most important, though flexibility and agility are also our friends when it comes to readiness. What I’m sharing here is what’s worked for the somewhat anti-social, arthritic-in-places, unfashionable me over the years.  Many roads lead to Rome. These are the themes of my road, though the details are always in a state of evolution.

Strength enhances the effective handling of a slide or bolt, the removal of a magazine during a double-feed, and carrying steel targets hither and yon.  Strength helps you keep the muzzle in a safe direction as you rise from a non-traditional shooting position like prone or kneeling.  Strength prevents fatigue and tennis elbow from extended shooting sessions.

Strength and flexibility keep the muzzle in the desired direction while getting up or down. (Photo: Team HB)

The V-shaped torso and better posture that come with training for upper body strength enhance survivability even off the range, by making a person look like a harder target than a round-shouldered, slumped, lump of humanity.  If you were a mugger or pickpocket, would you select the victim who looks like they’re capable of striking back, or the one who looks like a slacker?  Of course, there are capable slackers out there—but profiling is a skill that street predators have perfected to an art form. Make your physical profile, as well as how you carry it, work in your favor.

Includes the staple of the simple push-up.  At age 26, I started doing a single set of 30 per day, which took a mere minute of time.  More than two decades later, I still use this quick and free exercise in a single set of 50 on days when I don’t do other upper body work. Push-ups, done correctly, work the entire upper body, including the abs—and everybody loves tighter abs. For women, they have the added benefit of tightening the triceps that, without serious attention, begin to flap in the breeze with age.  Virtually anyone can do a push-up, even if it’s from the knees-bent position. With some creative adaptations, like elevation, close-grip, or plyo, push-ups challenge even the fittest person.

This video series by Chis “C.J.” Caracci enhanced my push-up routine immensely. An added bonus is the mindset advice and humor he dispenses throughout every workout. Some years ago, I got to attend training provided by this former SEAL, law enforcement officer, and bodyguard, who has a wealth of experience with deadly-force encounters. While I don’t believe every instructor has to have swung from the vines of three continents to be worthy, his advice is well-founded and these workouts, though dated, are effective. 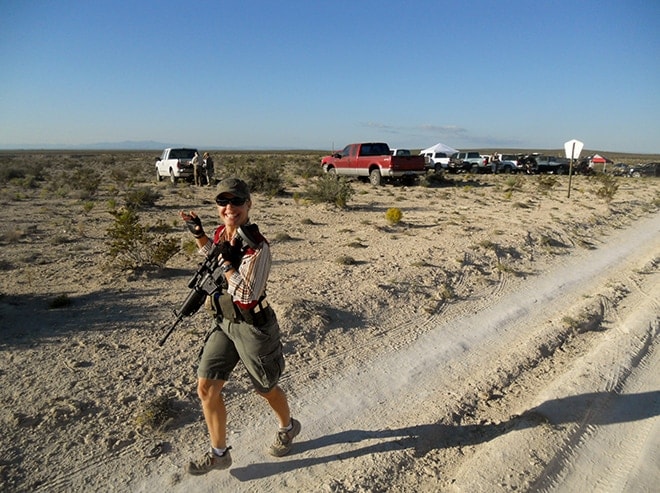 Competitions where you run over some distance and shoot are fun, and a great test of fitness. (Photo: Team HB)

The best response to a potentially deadly situation—whether it be a building collapse or an attacker wielding a weapon—may be to run.  Adrenalin will only get you so far.  Even if you decide to stay and fight, hide, or both, adrenaline combined with an unfit heart and lungs will not serve in combat.  The lower capacity of unfit cardiopulmonary organs makes trigger control (the “marksmanship” leg of the triad) difficult. The slightly congested, tightened sensation of unfit lungs under stress (yes, I’ve let my cardio slip on a couple occasions and know this first-hand) is often audible to bystanders. The sound of the guy’s labored breathing under the desk will attract the attention of one intent on killing.  Don’t be that guy. Techniques like combat breathing, which is beyond the scope of this article, help, but nothing replaces the clarity of lungs that regularly burn with exercise.

This will be bad news for some: running.  I’m not a fast or natural runner, and didn’t even start until surgery, at age 32, repaired an 8th grade knee injury. My program is informal, some would say sloppy, and not terribly ambitious—these days I cover 9-12 miles per week. I’ve tried other “cardio” programs, but nothing replaces running, and I believe this is true for others.

For a recent training event, my associate and I devised a running/shooting scenario for county officers that spanned about the same two-acre area of a truck stop where one of their kind was murdered some years ago. As one officer walked back from the exercise, sweating profusely, he said, “I’ve been doing a lot of cardio from a DVD. I thought I was in better shape than this.”  Another data point is the guilty pleasure of besting every member of the local high school swim team in a 5K, despite being more than twice their age. The difference between running and other forms of exercise is substantial, where heart and lung fitness for combat are concerned.  Painful and detestable as running can be, the results are unparalleled. 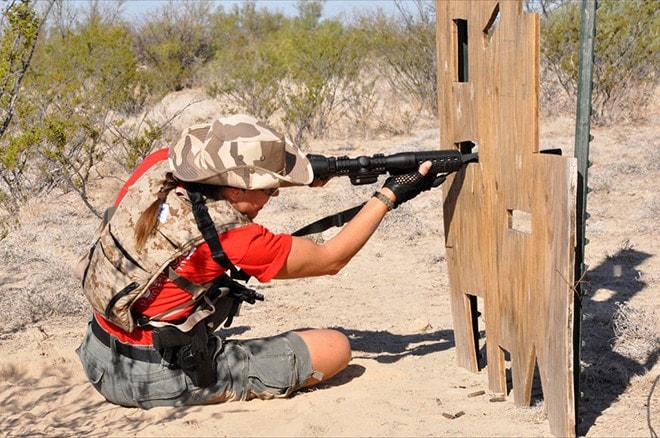 Flexibility training makes soft tissue more resistant to injury, among other benefits. It helps a shooter squeeze behind limited cover and shoot from odd but protected positions.  Along with agility, it’s the dressing on the salad of fitness.

Has varied over the years. If you, like me, aren’t inclined to darken the door of a yoga studio or go public with revealing attire, there’s “Diamond” Dallas Page and his yoga program on DVD—

learn a few of these moves and you can get enough done in your own living room in three minutes a day to perform better as a shooter. Not to knock live training—consider the Gunsite Academy instructor who was heard extolling the virtues of a reluctant trip to yoga class with his woman-friend: “it’s a lot harder than it looks, and you get to see women in tight pants.” Just pick some kind of stretching that improves your flexibility, and make it part of your pre-slumber or wake-up routine.

Agility is, to an extent, a bonus result of better strength and flexibility. In self-defense, agility is the interface of gross and fine motor skills.  Think about being pressed for time and having to step on that one floorboard that doesn’t squeak. Or perhaps you find yourself having to reload while holding onto a squirming toddler. There’s a reason football coaches use the classic jogging-through-a-row-of-tires exercise. Agility improves with practice, and you don’t need to be in the NFL to train for it.

I try to work agility-challenging activities into my week whenever possible.  Walking (or “hiking” if you like) and running over rocky terrain is a free and practical way to work agility into a cardio habit. 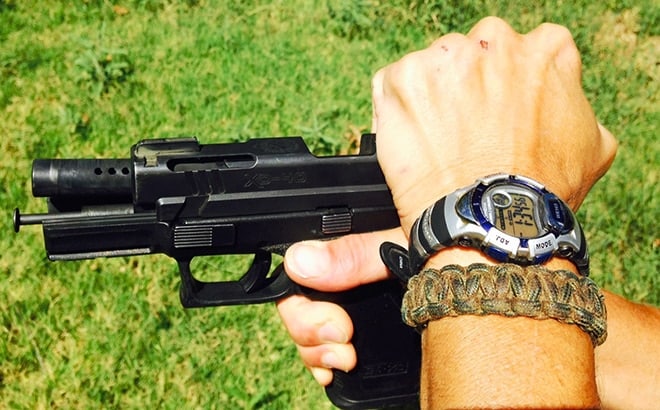 Cut the “buts” and do what you can, where you are, regardless of age, injury, work schedule, etc.  As a wise teacher (whose name I unfortunately have lost) said, “if you argue for your limitations, you get to keep them.”

Every person on this planet has a limitation of some sort.  Those who master the fitness aspect of mindset find work-arounds. Even if that limitation is the fact that you hate working out, there’s a workaround. As Jack LaLanne was fond of saying, “why do I want to get out of a warm bed, with a warm woman in it, put my feet on a cold floor, and exercise? I hate exercise—but I love the results.”

It’s my mission to help myself and others prevail in the fight or escape for life in the face of violent crime. Physical fitness is one way to prepare without burning ammo! Share your own PT successes in the comments. Keep it clean, please.