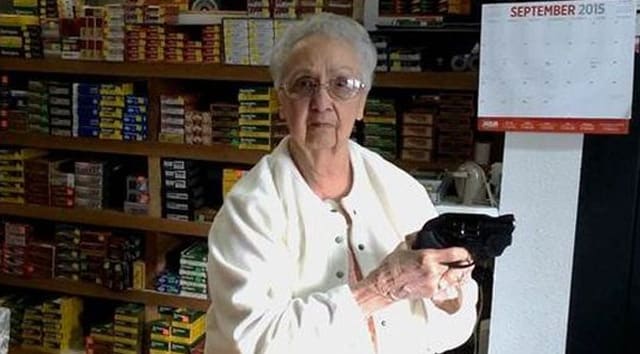 Carolyn Kellim turns her passion for guns into proceeds for those in need. (Photo: NBC)

Following the shooting at Umpqua Community College in Roseburg, Oregon, last week, an 86-year-old woman who owns a gun shop just miles from where the shooting occurred spoke with reporters about solutions to ending such violence, but none of her suggestions included gun control and instead aimed at something a bit more personal.

Carolyn Kellim’s gun shop, KC’s Exchange, consists of a single room in her Roseburg home with whom she has shared with her husband for nearly half a century. The room is jam-packed with all types of guns and ammunition, as well as supplies for the area’s many hunting enthusiasts.

Kellim, whose favorite weapon is a Ruger LCR .22 Magnum revolver, said that although she does not necessarily fit the conventional stereotype of a gunshop owner, she sees nothing unusual about what she does.

Through the course of that interview, Kellim spoke about last week’s tragedy, which claimed the lives of 10 people, including the gunman, and left nine others injured, but said more checks on potential gun buyers or further restrictions for gun owners would do little to deflect such incidents in the future.

“I think that’s the worst thing in the world they could do,” Kellim said, adding, “More constraints on guns is not the answer.”

Kellim didn’t shy away from her personal feelings about President Barack Obama either, referring to him as the “executive anus.” She said his ideas about guns are “strange.”

“He seems to think that they’re bad all the way through,” she said. “They’re not.”

Kellim instead believes the solution to ending such violence will come from a more personal level.

“I think you’ll find that you’ll get a lot better response from just loving people than you will from trying to find fault with them and trying to keep them controlled,” Kellim added. “Control is for animals. It’s not for humans.”

But Kellim doesn’t just talk the talk either, she is willing to put her money where her mouth is. In fact, she donates the profits from her shop to Casa de Belen, a local charity that helps homeless families and teens by providing transitional housing.

“That’s so important in today’s world,” she said. “We have to take care of people that have had a bad luck stroke.”

Kellim said more effort needs to be focused on providing help for mentally troubled individuals before they reach a breaking point.