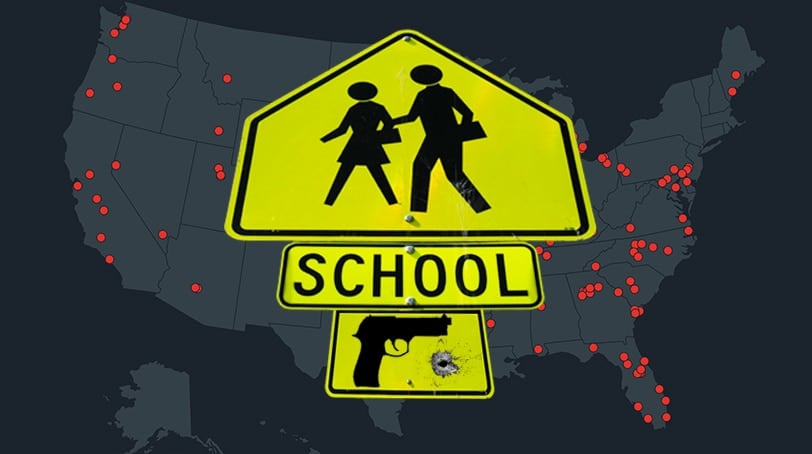 Following Oregon’s recent school shooting, a coalition of gun control groups on Tuesday renewed its push against gun violence and the gun lobby.

Everytown for Gun Safety and Moms Demand Action for Gun Sense in America released an interactive map of 142 shootings that occurred on school grounds or campuses since 2013.

The map includes 45 incidents this year where a gun was fired inside a school building or on campus grounds, but does not feature shootings that occurred off school grounds where the firearm had been carried at a school prior to the shooting – as was the case in the Isla Vista shooting in May 2014.

For all its legislative victories against the gun lobby – like helping to block campus carry bills in 15 states and closing gun show loopholes in six, including Oregon – it seems no law currently in place could have stopped the Umpqua Community College shooter from killing nine people and injuring several others.

All six of the guns the shooter carried with him when he opened fire on his college writing class on Thursday were legally acquired, as were the eight additional firearms recovered by law enforcement at the apartment where he lived with his mother.

Laurel Harper, a proud gun owner herself, was even prouder of her son’s extensive knowledge of firearms, the New York Times reported. In online posts going back a decade, she detailed her and her son’s struggle with having Asperger’s syndrome and the difficulty she faced in raising him. She also criticized “lame states” for their strict gun laws.

One area both gun control advocates and the gun lobby can agree on is in keeping the mentally ill from possessing guns.

Everytown has documented the deficiencies in state’s reporting of mental health records to the federal background check system and so has firearms industry trade representative National Shooting Sports Association with its FixNICS campaign.

The gun control group on Monday called on President Obama to take executive action on five regulations it proposed, including seizing the guns of the mentally ill and other prohibited persons.