Anti-Islam rallies and Republican mistrust of 'others' 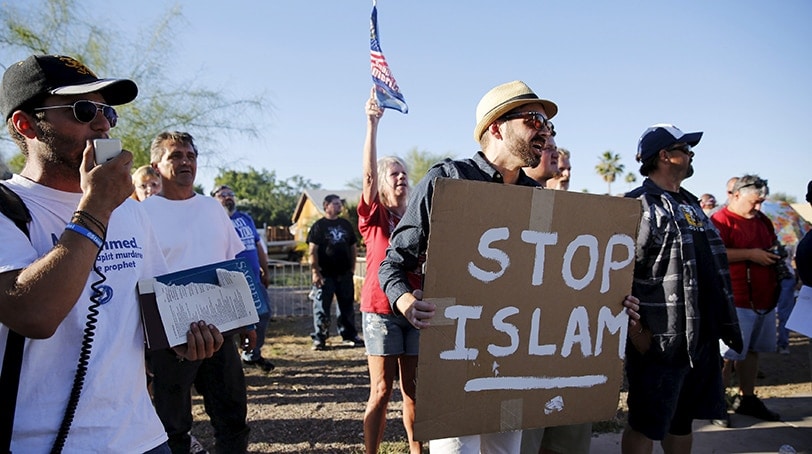 During a rally outside the Islamic Community Center in Phoenix, May 29, more than 200 protesters, some armed, berated the religion in a provocative protest that was denounced by counter-protesters shouting “Go home, Nazis” weeks after an anti-Muslim event in Texas came under attack by two gunmen. (Photo: Reuters)

As groups across the country plan anti-Muslim rallies, officials caution that radical Islam is not an ideology endorsed by most Muslims.

The Council on American-Islamic Relations issued a warning to mosques, calling on them to take added safety measures during the rallies planned Friday and Saturday by  “Global Rally For Humanity,” a group calling on “patriots” to rally at their local mosques.

“We’ve known about this for about a month now,” said Ibrahim Hooper, CAIR’s communications director. “A lot of the times with stuff like this, we don’t know if it’s just bluster or something serious. Our position is generally not to give attention to people seeking cheap publicity. But there’s been enough violent rhetoric around this event that we just felt it prudent to alert the community about what actions they can take to make sure everyone is safe and secure.”

Despite this public showing of anti-Muslim sentiment, most voters still don’t believe American Muslims living in the U.S. are treated unfairly, according to the results of a Rasmussen poll released Wednesday.

The survey found that 49 percent of voters surveyed said they thought the government doesn’t focus enough on the potential threat of radical Islam here at home.

Twenty-seven percent of those who participated in the phone survey said they think the government’s focus on the matter is just about right and only 17 percent said too much time is spent on it.

Republicans are more than twice as likely to think more needs to be done to combat domestic terrorism, according to the poll.

The results of the survey do well to illustrate claims of “Islamophobia” in the country. Some have accused politicians – particularly conservatives – of harboring a distrust of Muslims.

Some 54 percent of Republicans believe that “deep down” Obama is a Muslim, according to a Washington Post survey conducted in the fall of last year.

GOP presidential candidate Ben Carson last month on NBC’s “Meet the Press” said he doesn’t believe a Muslim should be president and that the religion of Islam is incompatible with the Constitution.

“I would not advocate that we put a Muslim in charge of this nation,” Carson said. “I absolutely would not agree with that.”

Carson’s comments were out of line with the results of a June Gallup poll, which found some 60 percent of Americans would vote for a Muslim president.

When asked whether he thought President Obama was a foreign-born Muslim – like Republican presidential candidate Donald Trump and others have suggested – Carson said he has no reason to doubt the commander-in-chief was born in the U.S. and is a Christian.

When asked recently if he thought Obama was a Muslim, Trump responded that he didn’t know.

Wisconsin Gov. Scott Walker, who two weeks ago suspended his presidential campaign, responded similarly when asked about Obama by saying he didn’t know whether the president was Christian.

Thirty percent of Republicans gave a similar response in the Washington Post survey.

Last month, Trump was criticized for not correcting a man who asked the candidate a question at a New Hampshire town hall meeting.

“We have a problem in this country. It’s called Muslims,” the man said. “We know our current president is one. You know he’s not even an American. We have training camps growing when they want to kill us. My question: When can we get rid of them?”

Trump defended himself on Twitter saying he was in a no-win situation.

“Am I morally obligated to defend the president every time somebody says something bad or controversial about him? I don’t think so!” Trump wrote.

So what is the U.S. government doing to fight domestic terrorism?

One study conducted by policy think tank RAND Corporation, found that for most cases of Westerners attempting to leave the U.S. for countries like Syria and Iraq to train and fight for jihad, they end up either in prison or dead.

That’s not to minimize the threat. Researchers and U.S. counterterrorism officials believe the American-jihadi fighters pose a serious risk to national security.

There have been an estimated 20,000 foreign fighters who have joined ISIL’s total ranks of about 30,000. Many of those came from European and other Western countries, which means they don’t need visas to travel here, according to another RAND study. Only 150 of those have come from the U.S.