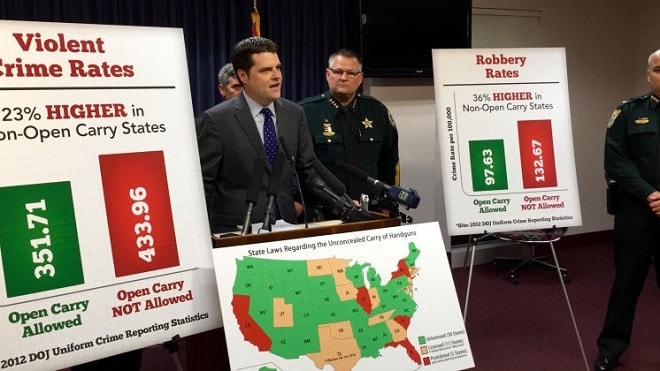 A bill to make the Sunshine State the 46th to grant the public open carry of firearms passed a House committee Tuesday with support of several sheriffs.

Opposition from state Democrats is palpable.

“If I was at a park with my daughter and I saw somebody openly carrying a weapon, I won’t know if that’s a good guy or a bad guy,” said John Whitley, a state committee member of Okaloosa County for the Florida Democratic Party. “I just think this is the opposite direction of where we should be going. We should be working on mental illness and gun control.”

Gatez, who has signed up more than 1,000 citizen co-sponsors to the legislation, also enjoys support from the sheriffs of Bradford and Pasco counties as well as from gun rights groups such as Florida Carry and the National Rifle Association.

“The growing list of Florida sheriffs who are speaking out in support of pro-gun, pro-Second Amendment legislation is gratifying and appreciated,” Marion Hammer, executive director of the Unified Sportsmen of Florida and past president of the National Rifle Association, told Guns.com. “Their support of the constitutional rights of citizens who elected them makes their constituents much more comfortable with them.”

HB 163 has to pass two further committees and the full House to advance out of the body.

A companion measure, Sen. Don Gaetz’s SB 300, is working its way through the state Senate.