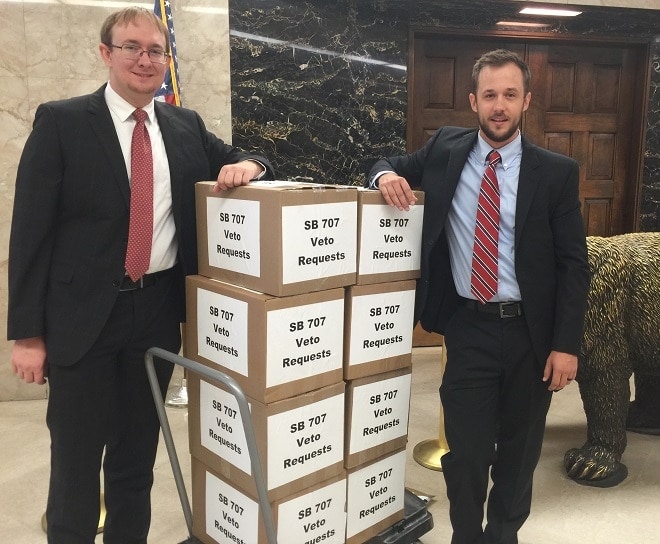 Staffers from the Firearms Policy Coalition delivered 40,000 letters to Gov. Brown on Tuesday seeking the veto of a gun control measure. (Photo: FPC)

Pro-gun groups are calling on California Gov. Jerry Brown to veto a measure on his desk that would end the ability for lawful concealed carry on school grounds.

The measure, if signed, would remove the long-held ability of licensed concealed handgun permit holders to carry on K-12 and university campuses in the state.

Proposed by state Democrats, SB 707 passed the Senate in a 23-12 vote in June sending it to the Assembly where it cleared in a largely partisan 54-24 roll call in September, moving it to Brown’s desk.

And it’s by the Governor’s veto pen that gun rights advocates are calling for it to end.

Tuesday the Firearms Policy Coalition delivered some 40,000 individual letters from concerned Californians calling for Brown to reject the measure.

“If SB 707 is not vetoed, this bill will put thousands of innocent lives at risk,” said FPC President Brandon Combs in a statement emailed to Guns.com. “Criminals will know that their intended victims are totally vulnerable when they’re on California school grounds because SB 707 will ensure that they’re defenseless against a violent attack.”

The bill drops the current exception to the 1994 California Gun Free Schools Act for carry on campuses across the state by those with a valid permit. Backed by a mix of public university heads, police lobby groups and gun control advocates, those who violate the pending law would be liable for a felony charge resulting in as much as five years in state prison.

The National Rifle Association and their state affiliate California Rifle and Pistol Association are also actively pressing their members to reach out to the Governor’s office in opposition of the bill.

“It is a solution in search of a problem, as we are not aware of any situation in California or the rest of the country in which a CCW holder committed an act of violence while on school property,” reads an alert from the NRA’s Institute for Legislative Action. “SB 707 is yet another misguided bill that only impacts law-abiding CCW permit holders while doing nothing to reduce crime.”

So far this session the governor has a mixed record on gun control legislation.

Last week, Brown, himself a Democrat, vetoed a popular anti-gun bill that would have increased the number of crimes triggering a 10-year firearms ban.

Meanwhile, he signed an Assembly bill opposed by the NRA, AB 96, which banned the sale of ivory to include vintage gun grips dated after 1977.

The Governor has until Sunday, Oct. 11 to decide to veto or sign SB 707 and AB 1134, another gun control measure on his desk.