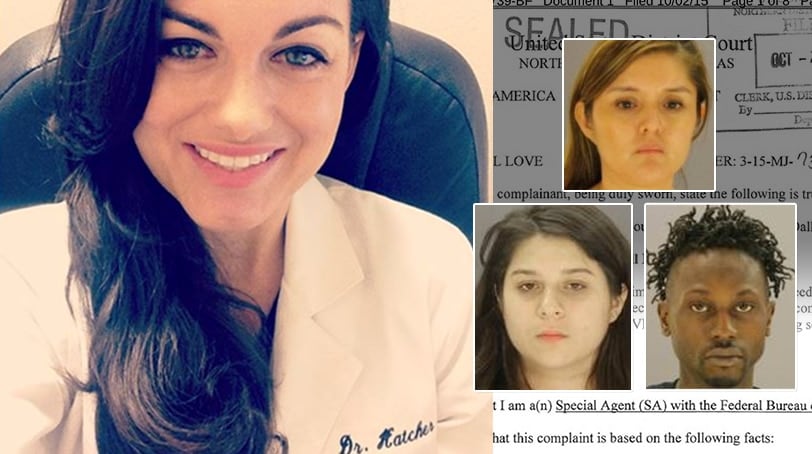 Kristopher Ledell Love (bottom right) was charged in connection with a murder-for-hire scheme allegedly orchestrated by Brenda Delgado (top right), the ex-girlfriend of victim Kendra Hatcher (left). Crystal Cortes was reportedly paid to drive Love to Hatcher’s apartment garage, where she was murdered.

A convicted felon suspected of murdering a Dallas woman on Friday was hit with weapons charges, according to court documents unsealed this week.

Kristopher Ledell Love, 31, of Memphis, Tennessee, was arrested last week in connection with the alleged murder of Dallas dentist Kendra Hatcher, according to the U.S. Attorney’s Office.

The Dallas Morning News reported that Crystal Cortes was paid $500 to drive Love into the parking garage of Hatcher’s apartment. Love stayed hidden in the back seat of the jeep for several moments until Hatcher returned home.

According Cortes’ statement of events, Love then got out of the jeep, Cortes heard a single gunshot, then Love jumped back into the jeep carrying two purses.

Love then threatened Cortes, 23, and her 6-year-old son, telling her not to snitch, according to court documents.

Police reportedly said it was Brenda Delgado, a jealous ex-girlfriend of Hatcher’s boyfriend, who plotted and bankrolled the murder. She’s wanted on a capitol murder charge and is reportedly still being sought by police.

Upon Love’s arrest, authorities found a Smith & Wesson .40 caliber pistol under the front seat of his car he was driving, WFAA reported. Because of a 2005 felony conviction in 2005, Love was prohibited from possessing a firearm.