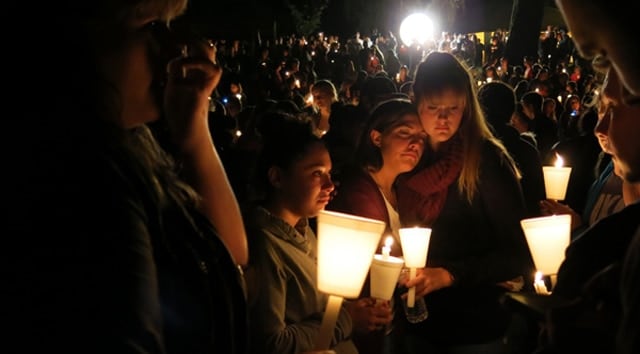 The surviving student’s mother said he now feels a tremendous amount of guilt because others lost their lives, but he did not. (Photo: CNN)

Before sparing his life during a deadly shooting rampage at an Oregon community college, the gunman offered one student a deal: Watch his fellow classmates be executed one by one and deliver a package to the police after the harrowing ordeal ended.

The 18-year-old student, who at the request of his mother was only identified as Matthew, was sitting in his class at Umpqua Community College on Thursday when the gunman entered the room and shot three people, including a professor. But Matthew’s mother, Summer Smith, said the gunman then stopped, turned to her son and said, “You – with the glasses – stand up,” according to accounts by Matthew, who the gunman referred to as “the lucky one.”

At first, Smith told CNN, Matthew did not quite understand the gunman’s request and believed he was standing up to die. But moments later, the gunman handed Matthew a package and instructed him to give it to the police. Then, Matthew was told to watch as the other students were killed.

By the end of the rampage, 10 people, including the gunman were dead, and another nine were injured. Matthew still does not understand why his life was spared, his mother said, but he has since had a hard time dealing with the massacre he witnessed. Smith said her son is different and will never again be the same. She also added that because Matthew lived and others did not, he is now riddled with guilt.

“He doesn’t know how to deal with it right now,” she explained. “I don’t think he can register what happened yet. It’s just too much.”

And Smith no longer attempts to understand why the killer chose her son either.

“I can’t ask why anymore,” she said. “I just have to be happy that Matthew is OK.”

Authorities have remained somewhat tight-lipped with details surrounding the shooting and the gunman, but confirmed that the package handed to Matthew was an envelope. Inside was a flash drive which contained various writings by the gunman, detailing the frustrations he dealt with in his life.