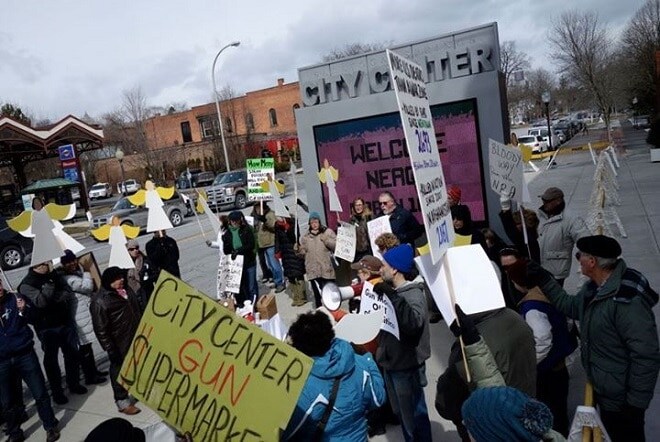 On the eve of the 100th Arms Fair at Saratoga Springs City Center, a gun control group with a history of protesting the event is calling for its cancellation.

Saratogians for Gun Safety has long made the Arms Fair, a semi-annual gun show now in its 32nd year, their nemesis. Protests of the event in 2013 even brought former U.S. Rep. Gabby Giffords to the show, along with significant counter-protesters.

Now, the gun control advocates want the city council to use their political power over the venue, which is publicly owned, to cancel the upcoming Arms Fair outright rather than commemorate it with a ceremony.

“The fact that next weekend’s show marks the 100th time a gun show will be held at the City Center is discouraging enough,” said Susan Steer, a group co-founder, as reported by the Saratogian.”The fact that it will be marked with a ribbon-cutting ceremony is just plain disgraceful.”

“We call on the City Council to use their political will and take steps toward ending gun shows at the City Center,” she said.

City officials contend the venue is under the management of the Saratoga Springs City Center Authority, and has little oversight of who books the location.

Meanwhile, City Center President Mark Baker is standing by the show, saying, “The Arms Fair has a solid, credible history of holding legal shows according to state guidelines.”