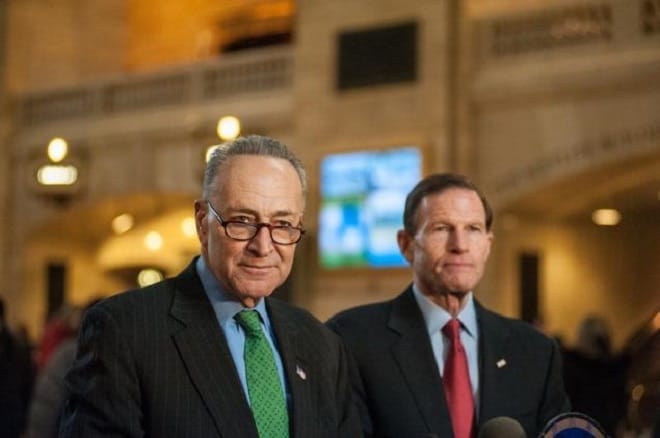 Sens. Chuck Schumer (D-NY) and Richard Blumenthal (D-Conn.) are among those advocating the time is now to move forward with gun control on the Hill. (Photo: Stephanie Keith/New York Daily News)

Leading gun control firebrands on Capitol Hill are backing a renewed call for expanded background checks and other restrictions.

Using the tragic shooting last week at Umpqua Community College in Oregon as a rallying cry, U.S. Sens. Richard Blumenthal and Chris Murphy of Connecticut, Charles Schumer of New York, and House Democratic Leader Nancy Pelosi of California have made calls for action.

The day following the Oregon school attack, Pelosi fired off a letter to House Speaker John Boehner calling for the creation of a Select Committee on Gun Violence.

“The epidemic of gun violence in our country challenges the conscience of our nation,” Pelosi wrote. “Mass shootings and gun violence are inflicting daily tragedy on communities across America.”

Besides the committee establishment, the California lawmaker called for a floor vote on the King-Thompson bill that would expand the current background check system to encompass the sale of all firearms, including those sold at gun shows, through the internet and in classified ads.

The call for expanded checks was echoed in a letter this week to Senate Democrats from Schumer and Sen. Debbie Stabenow, D-Mich., who wrote their efforts “will be a rallying point for a public that is eager for congressional action and will be the basis for future legislation that we will demand” to obtain a vote on gun control legislation in chamber.

Further, the pair is seeking to mandate all gun transfers complete a background check even if it is still pending after the current three-day limit and add all domestic abusers to the list of those prohibited from purchasing firearms, whereas current law just covers those who are married.

This comes as Blumenthal and Murphy, who each issued quick statements on the Oregon shooting last week calling for Congress to act on gun legislation, are now promising to introduce further bills to close so-called loopholes in the nation’s background check system.

“The time for action is now on universal background checks, a ban on illegal trafficking and straw purchases, a prohibition on assault weapons and high capacity magazines, as well as a mental health initiative and school safety measures,” he said. “This kind of comprehensive package of reforms has been proposed. This body failed to adopt it. But that is no excuse for inaction now.”