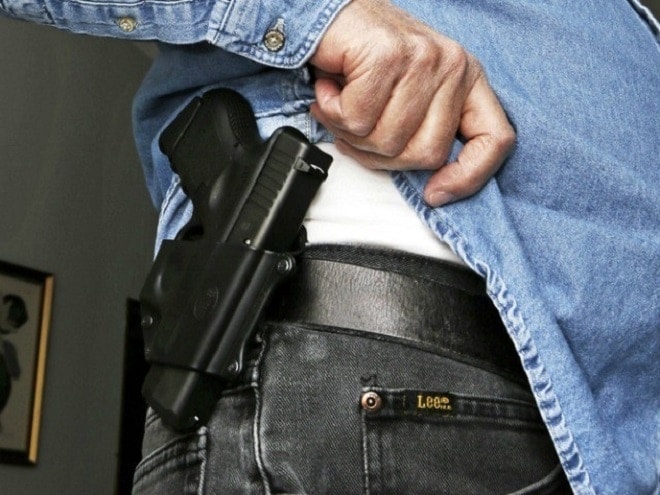 The Norman case involves that of a man who violated Florida law when his legally concealed gun was exposed by accident. (Photo: Al Behrman/AP)

The Florida Supreme Court on Wednesday confirmed it would hear a case dealing with how the state regulates the open carry of firearms.

The case is an appeal of a 2012 second-degree misdemeanor conviction of Dale Norman, 24, who was found guilty by a lower court for the open carry of a weapon outside of his home after his handgun, which he had a concealed carry permit for, became visible.

In February, a three-judge panel of the Florida Fourth District Court of Appeals upheld the original conviction citing that state laws against open carry do not, “destroy the core right of self-defense enshrined in the Second Amendment.”

Now the seven justices of the Sunshine State’s highest court will now debate that decision as announced this week.

Florida is just one of five states in the country that ban open carry and are in a club that includes California, New York, South Carolina and Illinois. However, gun rights advocates and Republican lawmakers have been chipping away at the restriction in recent years.

The practice is legal in the narrow confines of carry while target shooting, hunting or fishing and pro-gun advocates have long exercised that right.

Further, state lawmakers have attempted both past and present to expand carry rights to encompass wider adoption of the practice. A pair of measures currently working their way through Tallahassee would allow permit holders, such as Norman, the legal protection to carry without being prosecuted for violating the open carry ban if firearms are accidentally and unintentionally exposed.

Florida Carry Executive Director Sean Caranna was candid on the Norman case, which the gun rights group has long backed.

“The lower appeals court’s ruling was fundamentally flawed and we are confident that the Florida Supreme Court Justices will come to a more intellectually honest decision that will uphold the right to bear arms,” Caranna told Guns.com Wednesday.

A date for oral arguments will be set within 60 days.