No bikers from Waco shooting charged with murder, all out of jail 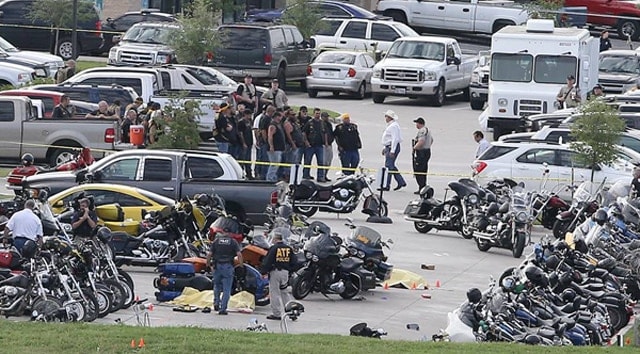 As they emerge, the details surrounding the shootout have been under scrutiny over the last five months. (Photo: AP)

Almost five months after a shootout involving authorities and two rival biker gangs outside of a restaurant in Waco, Texas, all of those who were initially jailed have been released and not one is facing murder charges.

The May 17 incident at Twin Peaks left nine dead and another 20 people injured. Authorities have yet to say who shot who, but initial reports indicated that a melee broke out between the Banditos and the Cossacks over a parking spot and an apparent feeling of disrespect toward one of the members. During the investigation, authorities confiscated nearly 500 weapons, including 151 firearms, and recovered 44 shell casings from the parking lot. Among the casings were multiple spent .223 rounds.

Altogether 177 people were arrested and 135 were later ordered to wear ankle monitors. But as of this week, all but 22 of the monitors have been removed, and none of the original 177 individuals remain in jail. Of the charges that do remain, defense attorneys indicated the district attorney has plans to eventually dismiss most of those charges, according to reports from the Waco Tribune.

However, prosecutors have maintained that members of the two rival biker gangs, most of whom were armed, showed up at the restaurant that day, flaunting their colors, completely aware of the chaos that it could cause. But the defense, who said the bikers did not commit any crime in going to the restaurant, argued that was not the case and the bikers could not have possibly known that a gunfight would erupt in the parking lot.

Defense lawyer Adam Reposa, who is representing several members of the Banditos, said he feels the court system is simply starting the process of letting them all go because they realize they will not end up with 177 convictions and 177 life sentences.

“It is going to end up pretty much the opposite,” Reposa said. “So if you are the people who are prosecuting, you have to start culling cases that you are conceding. They realize they are not going anywhere with this particular individual, so eventually, they have to start letting go.”

However, Reposa said authorities are not admitting any wrongdoing on their part.

“Oh God, no. They would never do that,” he said. “I don’t think we will ever get to that point where they admit these people did nothing wrong and should never have been arrested.”

Currently, according to Ronnie Marroquin, office manager of the company which supervises the GPS monitoring systems, none of those who were ordered to wear ankle bracelets have engaged in any serious violations. Minor violations included missing curfew by a few minutes, but Marroquin said the reasons given were considered to be acceptable.

Additionally, defense attorney Paul Looney indicated those still wearing the monitors – which cost the individual $355 and an additional $255 per month while they were wearing them – was likely more of a technicality than an indication of culpability.

“I can only speculate,” he said, “But my guess is that the ones that are still wearing the ankle bracelets present some type of specific flight risk, or, in the alternative, their lawyers are lazy and they just haven’t come in to visit with the prosecutor.”

Looney said “a lot” of lawyers have failed to visit the prosecutor about the ankle monitors. Like Reposa, he also added it is his opinion that prosecutors will be unable to convict anyone who is still alive.