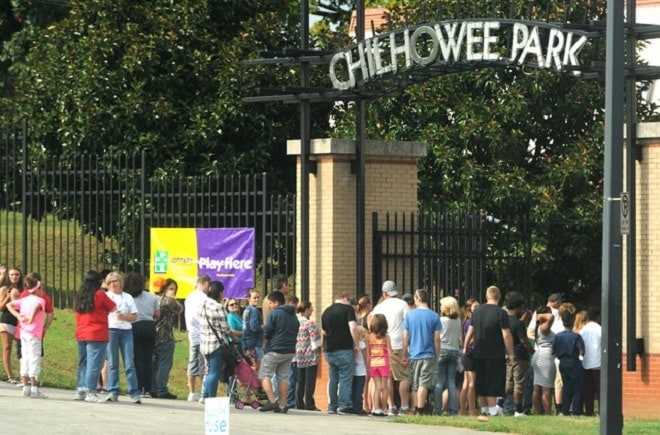 The 81-acre city-owned Chilhowee Park is not actually a park according to the city. (Photo: Adam Lau/Knoxville News Sentinel)

The National Rifle Association filed suit in Knox County Circuit Court on Wednesday over the city’s prohibition on concealed carry in an area park.

Gov. Bill Haslam signed a law in April that forbids local city and county governments to ban a lawful permit holder from carrying a handgun in a public park that is owned, operated or used by that local government.

In Knoxville, the Mayor and city officials contend they do not manage the 81 acre publicly owned Chilhowee Park venue under the city’s Parks and Recreation Department, thus making the current gun free zone there outside of the new state law.

“The Mayor and the City of Knoxville are in clear violation of Tennessee law,” said Lacey Biles, director of NRA State and Local Affairs, in a statement emailed to Guns.com.

In a 15-page suit filed this week, plaintiff Pandora Vreeland, an area resident and concealed carry permit holder, claims she could not safely attend a recent event at Chilhowee, as she had to do so unarmed, thus violating her Second Amendment rights.

Further, the suit argues the city and county in the past have declared and classified the area as a park in a variety of ways and are only refraining from doing so now in an effort to circumvent state preemption laws.

“We believe state law is clear, and Knoxville is violating that law with regard to Chilhowee Park. We hope to have the issue addressed in Court soon,” said Vreeland’s attorney Lela Hollabaugh.