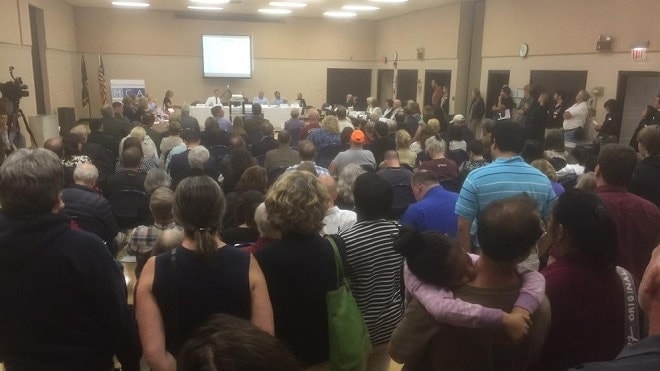 Those both for and against an area gun shop packed a public meeting in McLean, Virginia this week. (Photo: Dwayne Myers/WJLA)

In response to protests over the relocation near an elementary school of an area gun store, the McLean Citizens Association is taking action.

While veteran-owned Nova Firearms moved less than a half-mile from their previous location, the fact that it is now across from the back of Franklin Sherman Elementary School brought out protesters for the store’s reopening on Sept. 26.

This set the stage for Wednesday’s unanimous vote by the McLean Citizens Association to take the store’s current location under study for a month by a committee, then report back with recommendations.

Some Fairfax County Supervisors, while admitting the shop complies with local and federal laws, contend Nova’s new location is a no-go.

“I guarantee you it’s going to be very difficult for the community to learn to live with this. So, we are not going to be able to give up,” Supervisor John W. Foust told Fox5. “It’s going to be difficult to find a solution. It will take cooperation from the landlord and the tenant. We’ve got to try to get that cooperation because it is just not acceptable to have this gun shop this close to Franklin Sherman Elementary School.”

Supporting the shop is the Virginia Citizens Defense League, a local gun rights group, who argue the public backlash is misplaced.

“It’s a wholesome business. Guns are a part of American culture,” said VCDL President Philip Van Cleave. The group contends their members outnumbered those in opposition to the store at this week’s meeting.

Meanwhile, the presence of VCDL and other Nova supporters — some lawfully open carrying — at the assembly brought howls from national gun control groups based in the D.C. area who are monitoring the effort to run Nova out.

“What we are seeing in McLean is local, democratic government being crowded out by armed insurrectionists who want to send a clear message; ‘Go too far with your gun store campaign and there could be consequences,'” said Josh Horwitz, executive director of the Coalition to Stop Gun Violence in a statement emailed to Guns.com.

As for the James Gates, owner of Nova, he argues it may not be easy to relocate.