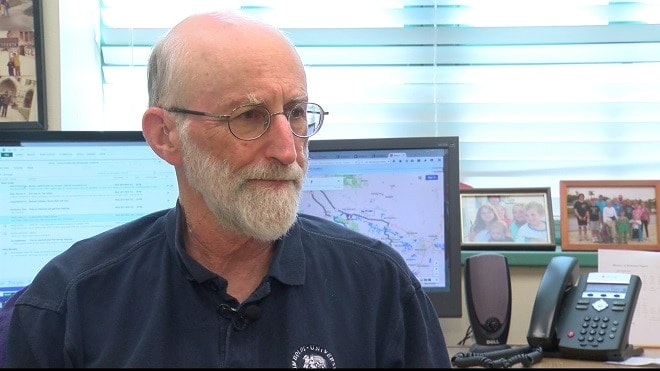 Economics professor Daniel Hamermesh is pulling stumps for the University of Sydney, citing fears of guns on campus. (Photo: KEYE)

A semi-retired University of Texas professor announced he would be leaving the school for good over new concealed carry policies.

Economics professor Daniel Hamermesh, the current Sue Killam Professor Emeritus, penned a letter to University President Greg Fenves this week backpedaling on plans to teach a microeconomics course in Fall 2016, due to mandated changes in the campus’s policy on concealed carry.

“With a huge group of students my perception is that the risk that a disgruntled student might bring a gun into the classroom and start shooting at me has been substantially enhanced by concealed-carry law,” said Hamermesh, who has been teaching since 1969, including 22 years at UT.

However, the educator isn’t hanging up the profession for good, he is just moving to what he feels is a safer campus.

“Out of self-protection I have chosen to spend part of next Fall at the University of Sydney [Australia], where, among other things, this risk seems lower,” wrote Hamermesh.

UT President Fenves earlier this year announced a 19-member working group to recommend both safe firearms storage guidelines and enduring gun free zones for the campus and, so far, public forums seeking input to the process have received a decided anti-gun backlash from faculty, with more than 390 UT faculty members, including Hamermesh, pledging they would not allow students with CHLs to carry in their classrooms.

“We will be planning some collective action when the law takes effect in Fall 2016, but at present it is a statement and it is up to the individual to interpret it as they wish, and to take action (or not) however they choose,” reads a statement from organizers of the refusal list.

Nevertheless, pro-gun student groups contend Hamermesh is setting himself up as a “false martyr” for those against campus carry and point out the only class he instructs is for first-semester freshmen who average 18 years of age and are not old enough under Texas law to carry a concealed handgun.

“Why is Professor Hamermesh worried that allowing CHL holders to carry guns on campus will increase his chances of being shot by students who are too young to obtain a CHL?” asks a statement from Students for Concealed Carry, who have been vocal in support for campus carry laws across the country.

Further, they argue Hamermesh is potentially spinning a routine job change to fit a political agenda. According to his bio, the educator has held visiting professorships at universities in North America, Europe, Australia and Asia, and lectured at over 250 universities in his career.

“Given that Professor Hamermesh tendered his resignation only two semesters earlier than planned and now intends to take a job at an elite university halfway around the world, his decision to publicly blame a law that would not have impacted his classes reeks of political opportunism. Opponents of campus carry needed a martyr, and they found one in a professor who was on his way out anyway,” reads the statement.

Indeed, gun control groups including the Coalition to Stop Gun Violence are heralding the economics professor’s move as the first of many.

“The brain drain is going to be enormous,” forecast CSGV in a statement.

In the end, Hamermesh’s relocation to Sydney is not a guarantee to escape gun violence as one of the worst mass shootings in Australia’s history occurred in 2002 at Monash University in Melbourne while one of those fatally shot in last December’s terrorist siege at a Sydney coffee shop was a well-known alumna of the University of Sydney.