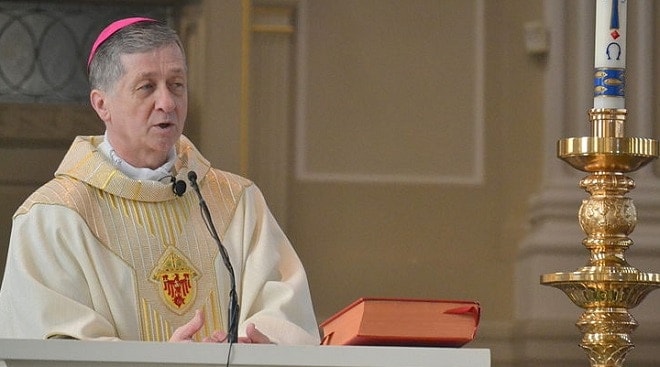 Archbishop Blase Joseph Cupich, head of the Roman Catholic Archdiocese of Chicago delivered a scathing call to action this week against guns.

Holding up recent gun deaths both in Chicago and a high-profile attack on a community college in Oregon, the religious leader railed against what he classifies as outdated Constitutional protections on the right to bear arms.

“The Second Amendment was passed in an era when organized police forces were few and citizen militias were useful in maintaining the peace,” wrote Cupich in part of his 600-word piece. “Its original authors could not have anticipated a time when the weapons we have a right to bear now include military-grade assault weapons that have turned our streets into battlefields.”

Following up on remarks made by Pope Francis to a historic joint session of Congress in September, in which the pontiff blasted international arms trades, Cupich made an effort to link the speech to domestic gun rights as well, saying, “Surely America’s political leaders did not think the pope’s comments were limited to arms trade outside of America’s borders.”

Calling for the rest of Illinois to implement Chicago’s strict gun store regulations, the Archbishop urged civic organizers to band together and pressure lawmakers to enact gun control legislation.

“The Second Amendment’s original intent has been perverted by those who, as Pope Francis recently commented, have profited mightily. Surely there is a middle ground between the original intent of the amendment and the carnage we see today,” said Cupich.

The Chicago archbishop’s commentary on gun violence is not the first time in recent years that catholic leaders have become involved in gun politics.

Last May, Cardinal Sean P. O’Malley, the Archbishop of Boston, issued a letter of support for a strict overhaul of the state’s gun laws, including expanding Massachusetts’s may-issue concealed carry policy to cover not only the carry of handguns, but also the ownership of handguns, rifles, and shotguns.

Chicago’s own Father Michael Pfleger has long-lobbied the Archdiocese to ban firearms in places of worship.