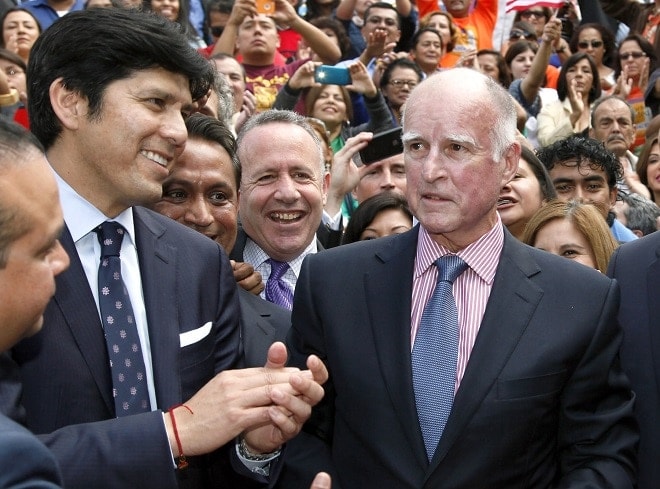 California Gov. Edmund “Jerry” Brown signed legislation that makes it a felony for a concealed carry permit holder to bring their gun on a school campus, unless they are retired law enforcement. (Photo: San Francisco Examiner/File photo)

The number of states to allow licensed concealed carry on public school and university grounds shrunk by one with California Gov. Jerry Brown’s signature this weekend.

The legislation signed by Brown without comment along with 30 other bills on Saturday removes the long-held ability of licensed concealed handgun permit holders to carry on K-12 and university campuses in the state.

Proposed by state Democrats, SB 707 passed the Senate in a 23-12 vote in June sending it to the Assembly where it cleared in a largely partisan 54-24 roll call in September, moving it to Brown’s desk.

Despite widespread resistance to the bill by state and national gun rights groups that included threats of litigation and 40,000 opposition letters delivered to Brown’s office last week, the governor was not swayed.

This left some who stood against the bill irate. “I’m angry and outraged about Governor Brown’s decision to sign this awful bill,” Firearms Policy Coalition President Brandon Combs told Guns.com by phone Saturday.

Combs is standing by his group’s promise to see the state in court over the bill, which they contend is in violation of the U.S. Constitution on 14th Amendment equal protection grounds, citing a 2002 precedent, as it allows specific exemptions for current and retired law enforcement officers to carry on campus if authorized by their former agency.

“We will follow through on our promise to create equality by targeting every single government employee exemption, starting with SB 707,” said Combs, telling Guns.com the FPC is already spinning up litigation. “We’re done being sold out by law enforcement and this means war.”

Gun control groups, to include Moms Demand Action, Everytown and the Brady Campaign celebrated Brown’s signature on SB 707 as a solid win in the fight against gun violence despite the fact that advocates for the measure could not cite a single instance of a lawful permit holder being involved in a school shooting in the state.

“Thank you Governor Jerry Brown for your commitment to protecting human lives instead of gun manufacturers’ profits,” wrote the group.

The news of the ban on legal campus carry came the same day as a report that the California Community College system, which with 113 campuses is the nation’s largest higher education system, does not require schools to have security or training plans that address active shooter scenarios.

Besides Brown’s action expanding gun free zones in the state, he also signed AB 1134 into law on Sunday.

This specific practice, which gun rights advocates paint as an unofficial ban on issuing permits by sheriffs, was found illegal by a state court last January in the case of Lu v. Baca.