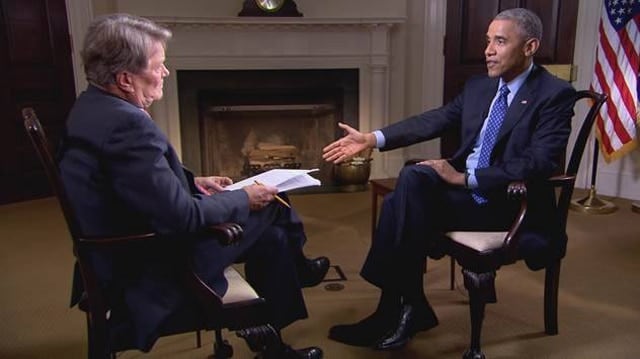 “The challenge we have is that the NRA — the National Rifle Association — is very well organized. It’s very well financed. They are single issue voters,” said President Obama about passing gun control legislation during an interview with 60 Minutes on Sunday.

“There is a very passionate group of gun owners who see a conspiracy around any new legislation and have an absolute belief that the Second Amendment means nothing would in any way constrain them from having whatever weapon on the market and modest additional steps are the camel’s nose under the tent to take away their guns,” he said.

The president identified the NRA as an political adversary before. Following the U.S. Senate’s failure to pass a measure to expand background checks in 2013, Obama said the group “willfully lied” about the effects the bill, the Manchin-Toomey Amendment, would have if voted into law.

Before the Senate vote, the NRA advised that the expansion would include all gun sales — like between a father and son — despite language in the bill explicitly stating “family transfers and some private sales (friends, neighbors, other individuals) are exempt from background checks.”

The NRA has rarely addressed gun violence in the U.S. publicly and instead has focused its efforts on passing legislation to loosen gun laws that may affect law abiding citizens and expand gun ownership.

In recent history, following the tragic shooting of 20 first-graders and six educators at Sandy Hook Elementary School, the NRA proposed the “good guy with a gun” slogan and the NRA School Shield Program, which has floundered except for the proposal to add armed security in schools.

The president reiterated many points he has made in previous speeches regarding mass shootings and gun violence.

He added that his administration is running out of administrative actions and it’s unrealistic that current lawmakers in Congress will pass any new gun control laws, so the American public must care about the issue instead of growing complacent to it.

“The most important thing I can do right now is just keep on lifting up the issue and saying ‘it doesn’t have to be this way,'” he said. “I genuinely believe that.”